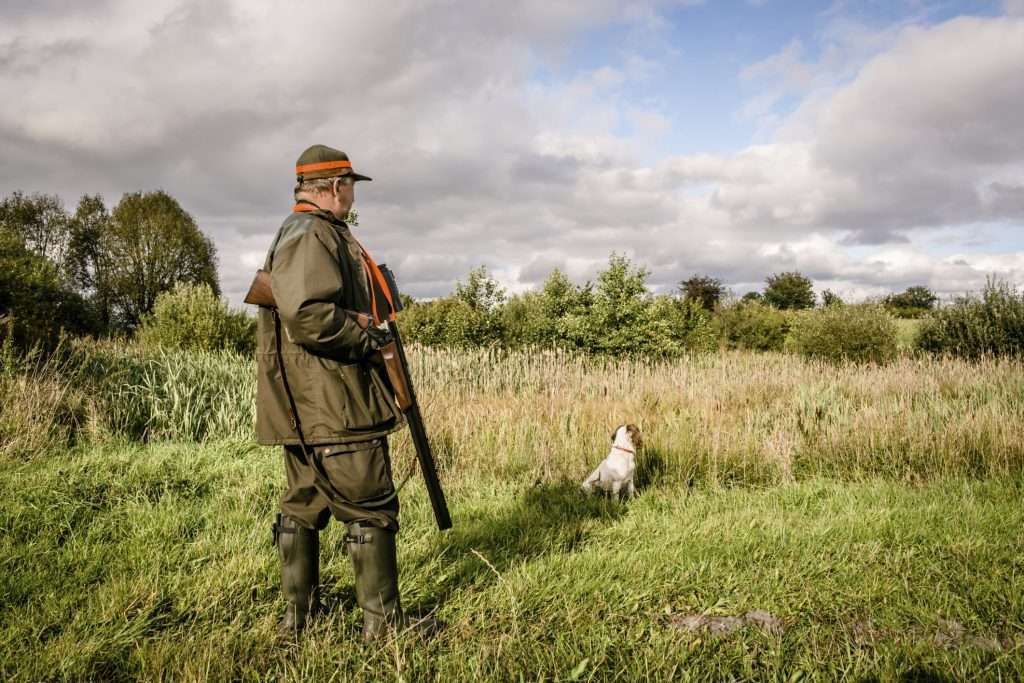 I thought he was into Internet pornography and/or carrying on a torrid affair. He’d be online for hours. But when I’d come near, he’d shield his computer screen from my sight, and divert my attention by saying something like: “Your hair’s on fire!”

Then I’d overhear him on the phone, urgently asking, “Where can we go?” and “How long can you be out?”

He IS having an affair!!! WAHHH!!! And all these years, I thought I was married to a straight-shooting, G-rated guy.

Then I learned the truth: he’s straight-shooting, all right. But he’s H-rated . . . for “Hunting.”

That’s right: the midlife crisis of my Beloved has taken shape as an obsession with guns, ammo, fishing poles, the out-of-doors . . . and all the gear, boy toys and accessories that go with.

I guess I started it. He was invited to go out hunting with his best friend since kindergarten. He hadn’t been hunting for decades. They had such a great time that he bought a shotgun on the way home. He was cleaning it on the porch when Maddy, 4, happened by, and frowned: “You’d better not shoot that in the HOUSE!”

But what a great, outdoorsy activity! Perfect for a Godly man who could be responsible around guns. He had worked very, very hard at his job, putting up with me, and rearing our four kids. It was time for him to get out some more, and have some guy fun.

So for his 50th birthday, to encourage him to get back into hunting as a hobby, I gave him a Rhino. Not the horned animal . . . the Yamaha all-terrain vehicle. It looks like a little camouflage Jeep with a cute back cargo hold and snazzy-looking roll bars.

The Rhino goes fast. Therefore, he loved it. He immediately went out and got a camo hunting cap to match his new camo hunting vehicle. Then an orange one. A friend gave him camo gloves, toe warmers, and some hunting-blind hors d’oeuvres. He got duck calls and ammo.

He went online and got a gun rack for the Rhino, a storage box and who knows what all else. Somehow, he had wound up with an old plastic windshield that fit a golf cart, and so he rigged that up on the Rhino, too.

Then he started going crazy. He got a 72-part hunting outfit, with layers, zippers and secret compartments enabling him to tough out the weather on six different planets. He got longjohns, liners and socks, mysterious clip-on dealies, and a hunting-dog kennel liner even though we don’t have a hunting dog. (But ohhhhh, yes. That was next. Not one, but two!)

The girls got him hunting and fishing gear for Christmas, including cheesy videos with tantalizing titles like “Walleye Patterns” and “Crappie Wisdom.” I got him a couple of hunting and fishing magazine subscriptions and even found myself wrapping his gifts in hunting-theme giftwrap.

He’s just like a little girl with a Barbie doll. Accessories: it’s alllllll in the accessories.

Actually, it’s ruining our lives. We have one decent family picture: everybody’s dressed up and smiling naturally, with no visible stains or bedhair. But now it’s a worthless picture. We don’t recognize Daddy without his camo hunting cap on any more.

He’s addicted. They say the wife is the last one to know. But believe me, I know. And so do the timid woodland creatures. He clanks and rattles so much with all that gear, they know he’s comin’ miles before he gets there.

Recently, he went to his friend’s acreage outside Kansas City to duck-hunt and goose-hunt with all his new glunk. They ATV’ed to a primeau spot, laid out all their decoys, and hunkered down in their super-secret blind with all their accessories at the ready.

Now, how many shots do you think they got off, in two days?

All that equipment, and the critters still won. Why? Because THEY’VE got “accessories,” too. Like instinct, fast getaway, and ways to protect and defend themselves. Nanny, nanny boo-boo.

But that’s OK. The main thing was to be together, outside, relaxing and having fun. So, at day’s end, my Beloved was loading back up his gear to come home, empty-handed, when one of his friend’s pet geese waddled right up to him . . .

. . . and bit him, real high on the back of the thigh. I mean REAL high. So high, it was right where he sits down. Oh, the irony! The poetic justice! The mighty hunter gets a . . . goose!

At least he looked cool and well-dressed when it happened. It’s alllllll in the accessories, you know. †

And all these blessings shall come on thee,

and overtake thee, if thou shalt hearken unto the voice of the Lord thy God.

Like Loading...
Posted in Great Moments in Dignity, It’s a Guy Thing
← Jordan’s WishLinus and the Blanket →