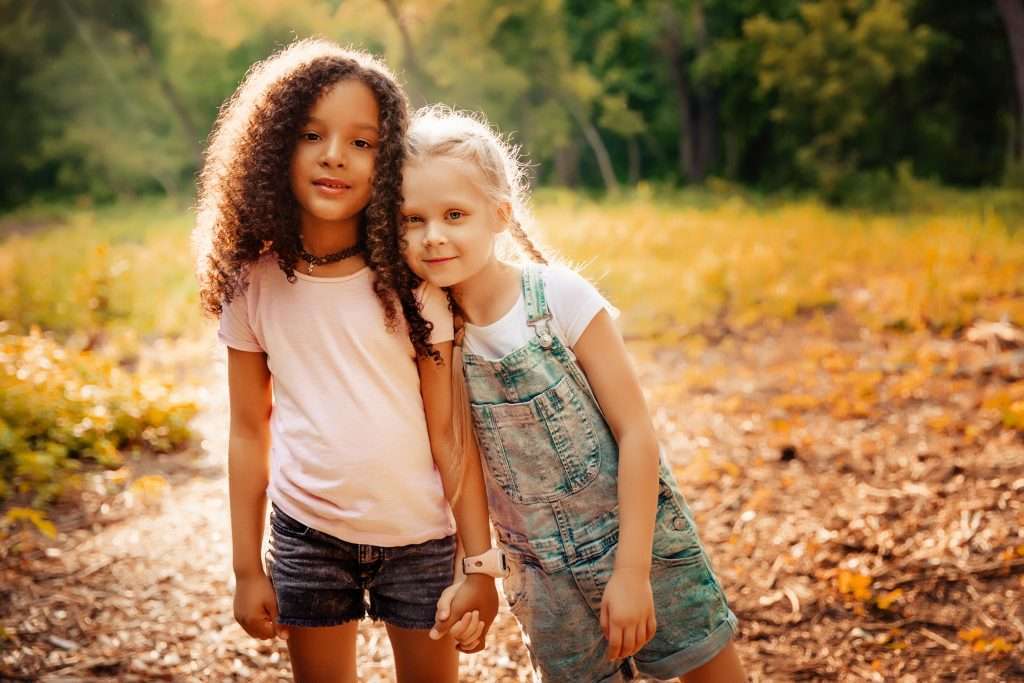 In remembrance of Martin Luther King. This story involves our daughter and her friend — not the children in the photo, but pretty close. This was 20 years ago. If there’s anything our country needs right now, it’s the appreciation for the gifts and challenges of “the other.” Racial reconciliation is at the top of most everybody’s list, and friendship is the key.

Jatara was tall. Beamer was short.

They were friends, back in the day. When they played together, you didn’t hear two separate, clashing melodies. You heard harmony. Music. Not separate tunes.

They weren’t self-conscious members of two different ethnicities, trying to get along. They GOT along. They didn’t need to make a big deal about their skin color differences. They were much more alike than different.

They found out a precious truth, that life is sweeter and tastier when you mix the flavors.

They both loved stories, and they both did well in school. Jatara could recite Maya Angelou’s “And Still I Rise.” Beamer won the third grade Continental Math Medal. They played soccer on the same team, and both loved animals. They both loved to talk and tell jokes.

On Jatara’s last visit before her family moved all the way across the city, Beamer got a stomachache from laughing so hard for so long.

It was sad when they couldn’t be together in school every day anymore. After the move, they were more than 200 blocks apart. Jatara was in the inner city, and Beamer was ‘way out in the suburbs.

They had a few play dates before the distance just got too overwhelming.

When Beamer first went to Jatara’s neighborhood, I worried. It’s not exactly Nob Hill. There was a lot of traffic. There was graffiti, and junk in the yards, and tall weeds in empty lots. Parked cars dotted the streets. The houses needed paint. Even the dogs looked and sounded tough and scary. The fences didn’t look strong enough.

Don’t misunderstand, there were lots of fun things to do at Jatara’s: sidewalk chalk, her toys, the park, basketball. Still, I worried: is my daughter safe down there, where everybody’s poor . . . and some might be desperate?

Then one day, I saw how rich the inner city really is. Just rich in a different way.

I was in the ‘hood on my way to pick up Beamer at Jatara’s. Suddenly, a big flock of birds, hundreds of them, rose up majestically from an enormous old cottonwood.

I gasped. It was like something out of a nature film from Africa.

Then, in a perfectly-choreographed arc, the birds flew as one, darting first to the left, then right, then sweeping upward, noisily moving together, in perfect choreography and syncopation, all the way out of sight.

A cloud of birds, literally. So many, and yet they flew as one. It was astounding. How did all those birds rise up at the same time, with no apparent signal? How did they stay the same distance apart? How did they know to turn at the exact same instant? How did they fly so fast and change directions without bumping into each other?

I realized that these were pigeons, “city doves.” You don’t see them out in the matchy-poo suburbs, with designer stick-trees that are hardly bird-worthy. Only in the inner city, where the trees are big, do the doves of the city fly as a cloud.

That sight beat anything you could see in more advantaged neighborhoods. It was a spectacular example of God’s perfection. He created birds that know how to fly in sync, powerfully united. It was a reminder of the blessings God has provided for the poor, blessings that the rest of us don’t know about. Maybe because we haven’t looked.

So I did look, at the ‘hood. Now, I saw it differently:

I saw the snazzy, artistic patterns of the old brick on the buildings. The close, neighborly feeling of households joined close together by sidewalks. The more interesting mix of different house colors, shapes and sizes than you can see in a newer, planned development. The gracious, old trees that spread out their shade to anyone and everyone.

Most of all, I saw the glow shared by Beamer and Jatara as they came out of the house babbling on joyfully about their time together.

That day, I learned that the ‘hood is not a scary place. It’s a place where birds fly as a cloud, and little girls laugh until they get stomachaches.

It’s a place where good hearts can get together, and fly as one, proving that it’s more fun to move together than to stand apart.

When birds of a different feather flock together, it’s an awesome sight. †

Who are these that fly as a cloud,

and as the doves to their windows?

By Susan Darst Williams | www.RadiantBeams.org | From the book “Radiant Beams” © 2016