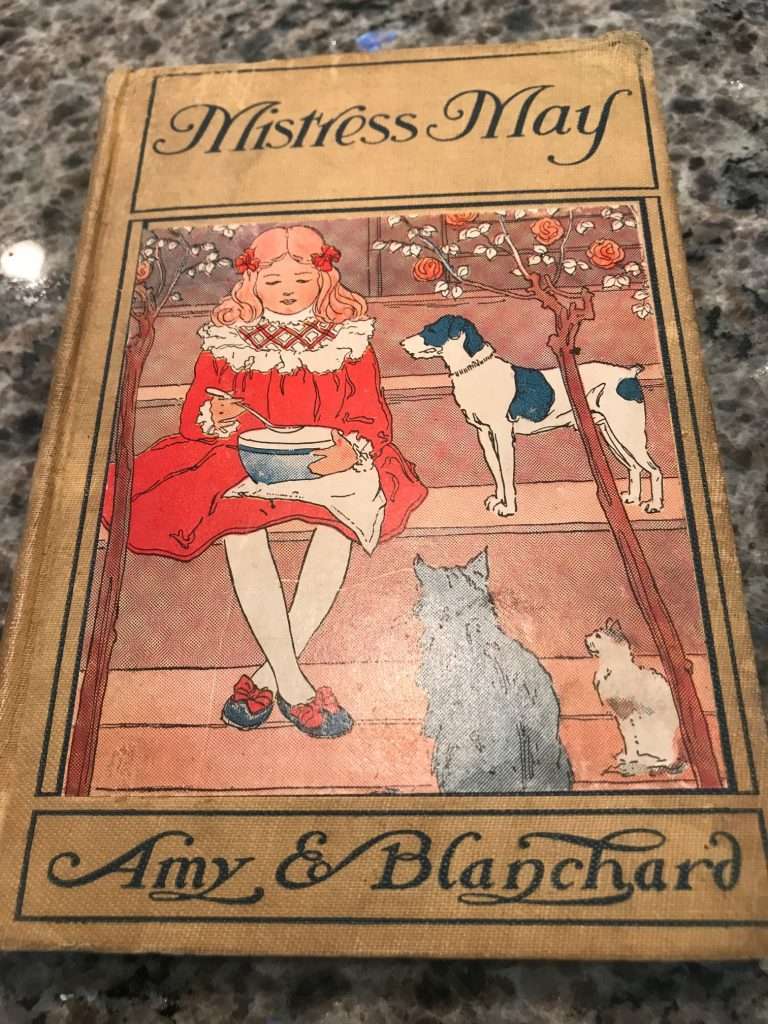 My mom gave me a box of antique books yesterday. She knows I can’t resist. There was a sweet old bird book, a horse veterinarian’s guide, and a couple of other serendipitous volumes.

I saw a title I vaguely recognized, “Mistress May.” I think it was a famous book for young girls back in the day – I mean, really back. It was published in 1901. Author: Amy E. Blanchard, three-time national book award winner.  Gee! This must have belonged to my beloved grandmother.

The book opened up to p. 146. My eyes fell upon this phrase:

It was referring to a little girl named “Bubbles” who was the substitute playmate for Mistress May when she had the mumps. Bubbles had already had them, so she was immune. She was described as “great fun” with “a lively imagination.” But those kind words didn’t salve the wound of the racist name she was called.

In dialogue, too, she was demeaned. Mistress May spoke in perfect English. But I could barely make out what Bubbles was supposed to be saying: “Dat de identicous place. Sposin’ we goes off thar an’ gits dem o’anges an’ grapes an’ p’ars. My, but dey is mighty good, dey fa’r make mah mouth watah.”

Now, my Grammie lived to be 95. In all that time, I do not believe she uttered a single racist remark or took any actions that would have been hurtful to non-whites.

But this is how the hearts of an American generation were taught about black people. From a nationally-prominent author! This is the kind of stuff we all need to become aware of, and publicly deplore. Racial reconciliation probably begins with good kiddie lit; it’s important!

I don’t believe in book burning . . . but I know our Lord well enough to know it was no coincidence that book opened to that page and I got an eyeful of the racist kiddie lit there used to be.

No, I don’t believe in book burning . . . but that book has quietly found a new home at the bottom of my wastebasket. GONG! †

There is neither Jew nor Greek,

there is neither bond nor free,

there is neither male nor female:

for ye are all one in Christ Jesus.

Like Loading...
Posted in Christian Living, Hot Topics, Young’uns
← You’re My JamRacist Kiddie Lit: What Is, and Isn’t →