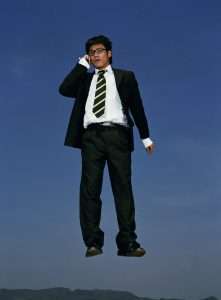 Thy words have upholden him that was falling,
and thou hast strengthened the feeble knees.

A man in town has an interesting claim to fame. He once fell out of an airplane and plunged down through the air 22,000 feet . . . and (duh!) lived to tell about it.

It happened during World War II, over the ocean. More than a half-century later, the fellow may occasionally forget things like his phone number and his grandchildren’s names. But he can remember vividly every millisecond of that 22,000-foot fall.

So I got to thinking. I can’t imagine any experience more likely to bring out your true character than to be in a free-fall like that. It would certainly expose your true virtues and your true vices. It would reveal what is really important to you.

It would take quite a while to plunge 22,000 feet. Death would be by far the most probable outcome. If I were falling like that, would I spend the time worrying about death? Or would I be thinking about my loved ones?

Would I pray and trust God to help me survive the fall? Or would I, quite possibly, be worrying that I’d gotten so fat, I’d make a huge, embarrassing splash that would be picked up by satellites and shown on TV around the globe as a possible extraterrestrial invasion?

On the other hand, I wonder how many Ho-Ho’s you could eat in a 22,000-foot free-fall. For once, you wouldn’t have to worry one bit about the calories. With my luck, I wouldn’t have any snacks on me that day. Or even if I could get one out of my pocket and get the wrapper off, it’d blow out of my hand before I could take the first bite.

Would I pop a can of beer, but it would blow upwards into my nose?

Would I think about my unpaid bills, or laugh because I wouldn’t have to pay them?

Would I think about my ironing pile? Or wishing it were underneath, because it would be the only soft thing on earth big enough to cushion my fall?

Would I think about how messy my desk is and how my poor survivors will have to plow through all those notes on scraps of envelopes filed amid old jelly sandwiches and candy wrappers?

Would I cuss? I know it’s not right to cuss. But a 22,000-foot fall would be the ultimate test of that resolve. If you call yourself a Christian, you cannot cuss. Can you imagine how frustrating it would be to plunge 22,000 feet to probable death, but able to say only stuff like:

What WOULD I do in that situation? It was fascinating. One night at dinner, I asked a few others what THEY would do.

My sister was practical. She said she’d be looking down at the water coming ever closer to her plummeting body, and she’d be thinking:

She’s a blonde. Can you tell?

My sister-in-law is also a blonde, but more pro-active. She said she’d be pointing her toes really, really sharply, and she’d have her arms out to the side like big bird wings, trying to slow her fall and soften her landing. On top of that, she said, and stood to demonstrate, she’d be cupping her hands out to the side, Aerodynamically Correct.

Our friend John interrupted vigorously. He jumped to his feet to demonstrate, too. He said that HE’D be cupping HIS hands, too . . . but in a COMPLETELY different place. He demonstrated. The other men nodded solemnly.