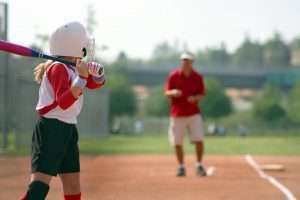 Nay, much more those members of the body,

which seem to be more feeble, are necessary.

Our daughter’s first softball season was my husband’s first at-bat as coach. It was a perfect bookend season.

Don’t get excited. The team won its first and last games . . . and lost the 16 in between. Hence, the bookends. It was one of those “character-building” experiences you go through as you round the bases of life.

It was the first athletic experience of any kind for many of the girls, and the first softball experience for most. Our opponents were mostly select teams. They had older, bigger, tougher players who’d played together for a while.

My husband said he just wanted to give the girls a heart for the game. He knew it would be a long, tough season.

Our first practice was like a Disney movie gone psycho. One teeny girl had to rubber-band her shorts’ waistband so they’d stay on. Another girl’s arms and legs were much skinnier than the bat. Balls flew over heads and between legs. Girls didn’t swing the bat . . . it swung them.

They threw with their glove hands and caught with their bare hands. Batting stances were wacky. Several girls cringed away from pitches, or refused to slide “because they’d get dirty.”

My husband staggered home from practices speechless and saucer-eyed over all that they didn’t know and couldn’t do, hard as he tried to teach them. It was character-building for Coach, too. He toiled over lineups, and mumbled batting instructions in his sleep.

Through a cruel twist of fate, our first game was against the one team in the region that was about as hapless as we were. So we started off the season with a win. It gave us false hope.

We lost the next 10 games in blowouts. The after-game snacks were the only highlights. Loss after loss after loss.

Coach did his best to keep shouting encouraging words during all those 3-up, 3-down innings: “Good cut!” “Good eye!” “Nice try!” “Way to hustle!”

He coached the old-fashioned way: from the heart. The girls knew he meant every word. They knew he believed in them.

They weren’t gifted athletes. They were becoming something better: a team.

Late in the season, while at bat, the skinny girl got hit with a hard pitch on the knee. We gasped, expecting her to crumple to the ground and cry. But she toughed it out and took her base. The girls were inspired by her guts, went on a hitting streak, and nearly won the game.

It was a turning point. The girls saw the strength that is so often hidden in weakness. They saw that they could believe in each other, and in themselves.

They still lost the next few games. But that was OK. Winning may be fun, but losing is a better coach. It doesn’t build ego; it builds character. In character, our girls hit home runs. But on the scoreboard. . . . Of course, we wanted to end the season with a bang.

Finally, it was the last game. We came to the last half of the last inning. Sadly, we were behind, 9-7. The bottom of our order was up. Little hope there for any hits. Oh, well. Sigh.

Suddenly, shockingly, the skinny girl hits a line drive to left field. She literally floats to first base. Her grin lights up four counties. Heyyy! She’s not skinny! She’s WIRY!

Next, the teeny girl gets a walk. You try getting pitches in to that minuscule space between her shoulders and knees. Our secret weapon: a teeny strike zone!

Then the one who never swung the bat all season gets another walk. Wow! Isn’t she selective? Good eye! Way to be patient! Way to go!

All of a sudden, the bases are loaded. And we’re back to the top of the order. The batter connects, bigtime . . . and brings ‘em all home.

Jumping group hug. Icy water dumped on Coach. Girls hysterical. Other team thinks we’re weird. The 17 fans in the bleachers do The Wave.

That’s the spirit. That’s the way you play the game. †