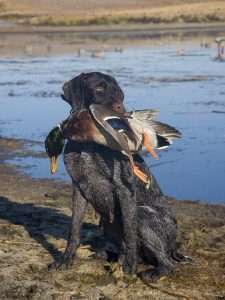 But the wisdom that is from above is first pure,
then peaceable, gentle, wiling to yield,
full of mercy and good fruits,
without partiality and without hypocrisy.

We have this friend who loves to help people. He’s a constant volunteer. He doesn’t just attend meetings. He sets up chairs, fixes equipment, coaches teams, lugs stuff around, everything.

One day, he got a hunting dog. He took her out and trained her and worked her. Pretty soon, he was running her in field trials.

Predictably, he was asked to help out at the field trials. Inevitably, he was put in charge. He studied up and tried his best to make these competitions really good. It was a lot of work.

So there he was, with mud up to his armpits most weekends, tramping around and managing dozens of volunteers . . . when he ran into Mrs. Thurston Q. Fancypants III.

You know the type. Everybody else trains their own dog and runs their own dog through the events. But not her. She pays a professional trainer to breed, raise, train, board, pet and scratch the dog. She just shows up at the trials long enough to brag about it at the next round of cocktail parties.

People like that don’t really know what it is they’re watching. But they want their dog to win. If their dog doesn’t, then something must be wrong. Not with the dog: with the field trials.

That’s what was up with Mrs. Thurston Q. Fancypants III, when she stepped out of her Mercedes in her white pants and butter-soft loafers to gingerly step over the cowpies and cornstalks and swish up to our friend. She stuck her cosmeticized face in his, and complained bitterly that things at the field trials were ”simply not acceptable.”

Ooh, she was mad. She would have his job! She would get these trials de-certified! She had contacts!

What was her problem?

The fellow who was throwing the bait out ”wasn’t doing it right.”

Wasn’t throwing them out for the dogs to retrieve in a fashion that suited her delicately-schooled predilections?

The unspoken assumption was that if he WERE doing it right, HER dog would be WINNING.

Now, our friend had presided at dozens of field trials. He had never heard such a complaint before. He had never met this woman, either. Yet here she was, stabbing her well-manicured forefinger into his chest – a finger she had never bothered to lift to help out in all the years he’d been involved.

Meanwhile, the fellow she was dissing was a longtime, faithful volunteer, quite competent, thank you.

Most of us would have been smashing duck guck into her Guccis by then. But not my friend.

He’s always on the hunt, not for a fight, but to do things the right way.

He smiled sincerely, apologized warmly, and asked her to do him a favor. Would SHE take over the crucial job of ”bait placement”? Then SHE could see to it PERSONALLY that the job was done RIGHT.

Well, the closest she had ever come to ducks before this was the paté at the opera patron party. But she took on the bait placement job. She poured her whole fancy-pants self into throwing those big, old, wet, nasty, dead ducks out onto the fields as if they were diamond tiaras, the whole afternoon.

Our friend said it was almost a religious experience for everyone there. They watched her in her designer clothes throwing big, old, wet, nasty, dead ducks out for all she was worth, which was a considerable amount.

It was a transformative experience for her, too. She never complained about anything in the field trials, ever again. No one could get over the change in her.

I don’t know if her fancy-pants dog ever won the trials.

All I know is, our friend got through HIS trials with flying colors. Everybody loved it. He proved once again that if you return meanness for meanness, you’re a dead duck. There’s a better way. When you pick the high road, everyone can win.