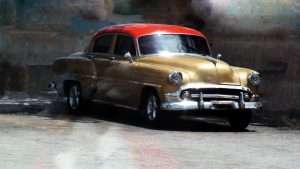 (H)e hath no form nor comeliness;
and when we shall see him,
there is no beauty that we should desire him.

We gave our daughter Eden her dream car for her 16th birthday, It was a red 1999 Mitsubishi Eclipse. I know: we are deranged, she is spoiled, and we should have spent that money on the starving masses.

But we listened to her two older sisters. They pointed to the endless hand-me-downs she has endured. Plus, they’re off gallivanting at college while she’s the dutiful designated babysitter for her younger sibling. Not fair.

Besides, they said, the car will get her wherever she needs to go, which means WE won’t have to, anymore. That did it!

She has decorated her beloved Eclipse with a dashboard hula dancer and ”Bowling Bob” from her discriminating friends. There is a dolphin dangling from the rear-view mirror, a Hawaiian-style flowered steering-wheel cover, and a clip-on CD container to keep 5,000 of her most essential tunes close at hand. Then there’s this felt doll named ”Elliott” clinging to the ceiling. . . .

So much for sophistication.

But then everybody thought back to THEIR first car. We didn’t have any sophistication, either.

Mine was “Whitby,” a nerdy gold ’65 Chevrolet Impala, a hand-me-down from my sister. The radio worked on alternate weekends. I had three crashes with her in one year, all minor, but all my fault. My husband’s first car was a gigantic, white, 1964 Pontiac Star Chief. It was a barge on wheels. After that, he had a Corvair. You know: the deathtrap! It was yellow, so of course he called it “The Lemon.” A few lucky friends had Jeeps or Mustangs. But most of us had beaters, and were happy to have them.

My neighbor lady topped us all with ”Bruce the Magnificent,” an enormous green Buick with a terminally peeling vinyl roof.

It had four doors in three colors. After a hit-and-run sideswipe, she had gone to the junkyard for a front quarter and two doors, all from different model years, and all of which she installed herself.

Yes, ”Bruce” was no “Car and Driver” cover boy. But he could hold 15 friends. Therefore, everyone loved him.

He only got four blocks to the gallon. But gas was 28 cents. The numbers worked.

Since the radio didn’t — work, that is — she duct-taped an AM radio to the dashboard. Voila!

The dome light didn’t work, either. So she had a big flashlight that would sit in the front seat. Whenever someone needed light, they’d turn it on, and everyone would yell “DOME LIGHT!”

The wipers worked, but wouldn’t shut off. She had to crawl under the dash and pull the fuse out. She finally learned to leave the fuse half in, and reach down to turn the wipers off and on at will, steer, operate the pedals – everything except actually see the road. Minor details.

But it ran. It was the only car that would start on cold, snowy mornings. Therefore, she was popular: Miss Teen Chauffeur.

When she graduated, her dad sold her ”Bruce” for a dollar. She loaded everything she owned into it and drove to Chicago.  The weight of the car caused the tailpipe to rest on top of the brake line. So there she was, zooming along at 70 mph on the eight-lane, and suddenly, no brakes. Beads of sweat!

Luckily, her buddies were driving behind her. Via sign language, she alerted them. They ran interference for her in the traffic. Using the emergency brake, she managed to pull off and come to some semblance of a stop.

Later, on another highway, she heard this flapping noise, only to look in her rear-view mirror and see what remained of the tattered vinyl roof flying through the air and landing, you guessed it, on the car behind.

They all survived, somehow. Bruce ruled the roads for two more years. He finally “rested in pieces” after she sold him for a $499 profit. The new owner put the engine into his own car.

She likes to think the Spirit of Bruce lives on.

Kind of reminds me of that Big Chauffeur in the Sky, the One Who really IS magnificent.

The One Who’s really big. Has plenty of room for all of your friends. Always works, in all sorts of weather. Reliable. Unique. Dashboard ornaments optional.

All you have to do is hang on for the ride of your life. †

By Susan Darst Williams | www.RadiantBeams.org | Girls Will Be Girls | © 2020