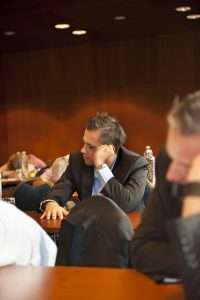 We have these friends. He’s a regular guy. She’s the biggest ”fem” I’ve ever known. By that, I mean that she’s into clothes and shopping and parties and giving hugs and decorating her house with cute things.

AAAIIIEEE!!! I’m sure my dripping sarcasm will get me in big, big trouble with the many, many people who love Precious Moments.

But I can’t help it. Even though I’m a card-carrying person of the female persuasion, too, with estrogen jets gushing full blast at all times, the figurines that are the world’s top-selling collectible are just, well, not that precious to me.

So when our friend started describing how his wife and her friend DRAGGED him and the other husband to Carthage, Mo., when they visited Branson recently, to the stupendous Precious Moments shrine, his account was so hilarious my cheeks still hurt from laughing.

My friend confided that, after a few minutes, he literally had to dash outside and gasp for air. The gale-force assault of cuteness, caring and sharing had that much of an effect.

He and the other husband were patient for a long, long time while their wives enjoyed seeing all the precious moments there were to see. But boy, did they suffer. They were nearly overcome by Precious Moments fumes. They so, so wanted to lay scratch and get out of there before the cuteness, caring and sharing brought them to their knees.

They dubbed their experience ”Precious Eons.”

They’re my kind of guys. And I’m glad to report that I have since encountered at least one other person of the female persuasion who joins us.

Here’s how I found her:

A while ago, this friend of mine accompanied her husband of more than 25 years to his hometown in outstate Nebraska for his class reunion. He had been the high-school quarterback and Big Man on Campus back then, and she was curious to see how his old friends had turned out.

Oh, let’s cut to the chase: she wanted to see if his old girlfriend had aged better, or worse, than she had.

The hometown honey had been a real knockout – a Miss America type beauty – with a face and form of the traditional heartland corn-fed beauty.

She had this sweet, sweet smile, and her brunette hairdo was done up in just the most adorable little flip.

Well, for the first six months that my friend dated her now-husband, she was mad because he kept his picture of Lula Belle in his wallet the whole time. They had been high-school sweethearts, but he broke up with her after he met my friend. He kept her picture anyway, though.

Finally, he relented and showed my friend the empty space in his wallet, though for years, she suspected that he had just put Lula Belle into some other secret hidey hole. Then whenever they would get into a fight, she wondered if he slunk away to his hiding place to mope and took out his picture of his REAL dream girl and rued the day and all that.

Of course, my friend’s husband has been a tremendous business success in the city in which he settled, with a net worth in the squillions. He did far, far better than he might have done with the small-town automotive store. But the fact is, he passed up a sure deal to marry someone else.

Well, anyway, they drove out to the town for the reunion in their grubbies and sunglasses, and went into the local drugstore for some things before they headed to the hotel to get dressed for the welcome party.

They went to the checkstand with their items. An older lady waited on them. In stark contrast to my slender friend, this lady was large – or, more politely, heroically proportioned — or as my late father would delicately say in his Politically Incorrect way, her girth measured ”an ax handle and a half.” Her graying brunette hair was done up in just the most adorable little flip. And she had a sweet, sweet smile.

My friend and her husband were almost out the door of the shop when another employee hollered over to the clerk, ”Hey! Lula Belle!”

They froze. Their eyes, well hidden behind their sunglasses, darted back over to the checkstand.

Not only that, but at the party that evening, they learned that Lula Belle had, indeed, given her hand to a local yokel. He, indeed, was running her daddy’s automotive store. And she, indeed, had been working at the drugstore pretty much since high school.

Not only THAT, but they learned that her home was filled to the rafters – to the brim – every available surface — every nook and cranny – stuffed — with Precious Moments figurines.

My friend was quick to point out to her husband that, if it hadn’t been for her, HE could be living in that same town, married to Lula Belle of heroic proportions, running her daddy’s automotive store, listening to her fascinating drugstore stories, and living in a house that was chockablock full of Precious Moments figurines.

All he could do was shudder.

And my friend is giving him Precious Eons – the rest of their lives – to think about that. †