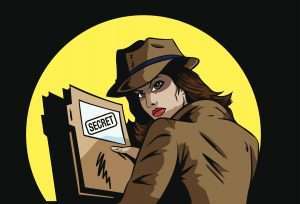 Stand in awe, and sin not:
commune with your own heart upon your bed,
and be still. Selah.

We women have our own Homeland Security. It’s a deep, dark secret, a stash of ammunition brought out only in severe crisis mode.

I have been known to serve chocolate chip cookies that were nearly chocolate chip-free because I snuck so many that never made it into the batch. In a pinch, I’ll even turn to unwrapping those super-dense squares of dark brown baking chocolate to eat like a snack. On a really bad hair day, dark brown sugar, mainlined, will work.

I wrote recently about going on the Atkins diet, and waxed orgasmic about my 20-pound weight loss. A big reason: I gave up sugar, but also my ”dark secret.” I’ve since learned how many other women have the same one.

A friend opened that email and literally had a Ghirardelli candy bar – dark chocolate, of course – halfway to her mouth. She dropped it like a hot potato, and stashed it away for another day.

That’s what we do – we stash. And sometimes, we get found out.

My friend Chris once accepted four dark-chocolate candy bars from a friend who was going on a diet. ”Hide these for me,” she urged. Only women understand missions like these. Chris has a ”dark secret,” too. But she resolved to preserve, protect and defend that candy in case it was ever needed.

She turned to the only place on the planet still her own: her underwear drawer. For weeks, those candy bars hid there without incident.

Then one Saturday, she came home and saw her husband on the deck steps with one of the candy bars, half-eaten. ”Hey, Baby!” he exclaimed, grinning. ”Look what I found in your underwear drawer!”

She gasped in horror: ”That’s PATTY’S!!! And you ATE it? Did it not OCCUR to you that it MIGHT belong to someone ELSE?”

Turns out for the first time in history, he decided to put the laundry away, found the stash, and thought it was hers.

Men just don’t understand. But they’re right about one thing: when problems emerge, we shouldn’t turn to turn to things that make us fat or drunk or in a stupor. I’ve learned this, being on Atkins these past six months. We have another Secret to turn to.

It goes like this: the other day, I found out that someone had done something really mean to me. But if I called them on it, it would make things worse. I was stuck. I really, really wanted a handful of chocolate chips. OK, a bag full. That addiction is powerful and you never have it completely under control.

Then, Maddy, age 3 1/2, made me stop and watch her repeatedly dent the belly of her rubber porcupine to see how long it took the dent to disappear.

This was a DOG TOY! I had BETTER things to do! But I could imagine her in a psychiatrist’s office someday: ”Why do you think you have these neuroses and psychoses?” ”Because my mother never cared about my hobbies.”

So I stuck with it. Ooh, could some dark chocolate bridge me over this torture. Visions of Hershey’s ”Special Darks” danced in my head with each belly-dent iteration.

Then I met friends for a birthday lunch. One of them gave the honoree a box of Italian candy – dark chocolate, of course – with a random toy porcupine decorating the box. Salivating, I told them about the ordeal with Maddy’s rubber porcupine, and wistfully said that I had never seen a real porcupine.

That evening, the accumulated stress overwhelmed me. I ran upstairs, hurled myself on my bed in the dark, and had a great, big, honkin’ pity party. I mean, I CRIED that I couldn’t have any more dark chocolate.

I yelled at God for this horrible state of affairs. You don’t care about me! You won’t let me have any fun!

Then I got the hiccups. Actually, they’re fun. I chuckled. Oops. Sorry I went off on You, God. My funk was broken. I got up, and plunged forward, chocolate-less.

WELL! At bedtime, my Bible flipped open to Psalm 4:4 — basically, ”just pour out your troubles to Me, and otherwise, shaddupaboudit.” In a nice way, of course.

I beamed. I don’t need dark chocolate or anything else. Jesus is my REAL secret . . . my REAL sweet. My eternal treat.

And then yesterday on a whim we took Maddy down to the zoo. Down in the deep, dark secret of the Desert Dome, guess what I saw, for the first time in my life?

Thank You, Jesus. Life with You: how sweet it is. †