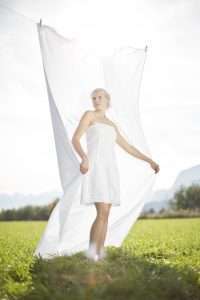 But if we walk in the light, as he is in the light,
we have fellowship one with another,
and the blood of Jesus Christ his Son cleanseth us from all sin.

She’s a lovely, talented girl, dating the son of a friend of mine, away at college. Like everybody else in the world, she has a past.

Oh, she was active in Christian groups in high school. But then she did some “stuff” she shouldn’t have. Eventually, she repented. Since then, her faith has been growing by leaps and bounds.

Well, her roommate this year is an agnostic. She has been trying to witness to this roommate, but has been rebuffed many times. The roommate would say that the idea of a personal relationship with God was “irrational.” She declined to read the Bible and pray.

The roommate had lots of quotes taped to her dorm walls, though. None were from the Bible, but it led my young friend to believe she really was a seeker. So she asked her to come to church with her.

To her surprise, the roommate agreed. It turns out this really cute BOY was there every week, and that was the real reason. But oh, well. Whatever works.

Then the roommate agreed to go to a women’s retreat, another surprise. That night, they stayed up really late, talking about all kinds of things, including faith. The young Christian continually prayed for words of wisdom to help the roommate with her doubts.

Next morning, she left a Bible verse on her pillow, Jeremiah 29:13: “And ye shall seek me, and find me, when ye shall search for me with all your heart.”

That week in youth group, the discussion was about baptism. She remembered how, when she was in fifth grade and was baptized, her sponsor gushed, “Don’t you just feel wonderful? All clean and new?” but she hadn’t felt that way at all. She had been too busy deciding whether to plug her nose, and anticipating getting to take communion.

Now that she had sinned big and repented, and matured in her faith, it had crossed her mind that maybe she should get re-baptized – and this time, mean it.

She left the baptism discussion early to go to her boyfriend’s Ultimate Frisbee game – but like a Frisbee, her head was spinning. The rest of the week, she felt stressed out and down about her finances, her schoolwork, and her tendency to excessively diet and exercise, something she knew was bad for her, but she kept doing it, anyway.

That Sunday morning, her devotional was on Romans 7 and how we keep doing what we know we shouldn’t, even though Christ has defeated sin for us. You know, the age-old problem: “the flesh is willing but the spirit is weak.”

At church, her minister suddenly announced something new and unusual: they were going to offer people a chance to be baptized, right then and there. In the Bible, baptism was always spontaneous, never scheduled. So they thought they should follow suit.

Then what did the minister read? That same passage from Romans 7.

She sat there, stunned, with her boyfriend on one side and her roommate on the other. Her heart raced and she got tingles. This was a “prompting.” She should go forward, up to the front of the church, and be re-baptized. Just do it.

Oh, but she didn’t want to.

What would people think?

What would she say for her testimony?

Worst of all, she was wearing a brand-new skirt that day. It had not been cheap. But it would get ruined: it was DRY-CLEAN ONLY!!!

She scolded herself. There’s the flesh, winning out over the spirit again.

But she sat there, agonizing, not wanting to be the first to stand up.

And then guess who did?

Her roommate – the agnostic!

The FORMER agnostic . . . thanks to her.

With big smiles and tears, they got baptized together – fully immersed – skirt and all.

How much better than dry-cleaning, though . . . to be bathed, refreshed and made new in the Water of Life. †