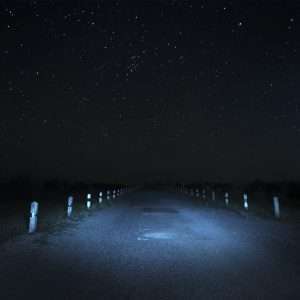 Last Sunday, a fellow at our church told how it happened to him. It’s a powerful Easter tale that is so screwy, so serendipitous, that it just makes me laugh and sing for joy. What a God we serve, and what amazing ways He uses to let us know He is with us and for us.

It seems that Larry, a father of five living in western Nebraska, had been shocked to come home from work one day and hear his wife of nearly 20 years tell him she wanted a divorce.

It rocked his world. Rapid-fire change took over his life. Three months later, he was living with a brother-in-law many miles away, working at a new job, and declining rapidly from the shock stage to utter despair.

“Things, in my mind, had gone downhill a lot,” Larry recalls. “It seems like I wasn’t seeing my kids much. It didn’t seem like anything would ever be like I wanted it to be: living in the same house again and on the same page.”

His children were ages 19 to 3. The eldest had started college. So much was changing, and so much was so hard, that he was overwhelmed with sadness, confusion, frustration and fear.

He was driving one night, aimless, in utter despair, hopeless. He didn’t say so, but you gathered that he was contemplating suicide.

Now, naturally, as a card-carrying western Nebraskan, he had a twangy country and western station on the car radio, blaring out a tune. But all of a sudden, Larry heard a man’s voice, saying:

Hunhhh? Whaaa? He ‘bout drove off the road.

Larry was raised a Catholic. He knew some Scripture. That sentence sounded like something from the Bible. But he hadn’t heard it before.

And boy! Was that ever weird, coming out of a country and western station!

Then he heard it again:

Wow! That’s odd! Larry snapped off the radio. There. That’ll fix it.

This time, there was no music playing underneath the voice. It still sounded as though it was coming out of his car radio. But he had turned his radio off. He punched the knob on again, then off again, to make sure.

And then he heard it again, two or three more times.

He knew it was.

He suddenly realized that his despair was gone. He felt completely different than he had just moments before. The loneliness and depression were erased, as if they had never been. He felt delivered. Dazed. Awed.

He was changed in a twinkling.

“I knew what it meant,” Larry says today. “God was speaking straight to me, letting me know He was with me. I felt peaceful about it, really comforted. I just felt a new confidence. He was saying, ‘I’m bigger than all of this, you know. I have something more for you.’”

Put the past in the past. Move ahead, to new life.

The divorce went through. He readjusted his relationships with his children. Things were OK after all.

Love came back into his life, too — bigtime. He will soon celebrate his 17th wedding anniversary with his warm and vivacious wife.

They both volunteer as lay counselors in our church’s marriage ministry, and share the excitement of eight children and 19 grandchildren between them. They’re working, they’re traveling, they’re active, and despite going through some rough and tough times in the past, they’re joyous, triumphant Christians.

Can you say it any louder and clearer?

Better yet, can you shout it?

Jesus Christ is risen today! He is greater than anything! He loves you and wants to be Lord of your life! That’s the message of Easter!