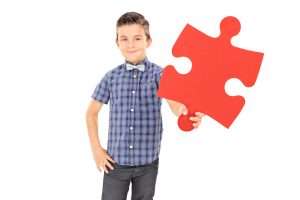 And said, Verily I say unto you,
Except ye be converted, and become as little children,
ye shall not enter into the kingdom of heaven.

As a Sunday School teacher for a dozen hyperventilating 2-year-olds, I have wished many times for certain key supplies to come along with the craft sticks, cotton balls, yarn, paper plates and gluesticks:

(1) Prozac in room-spray aerosol cans, and

Yes, teaching children can be frustrating and challenging. If a classroom of little ones is a microcosm of the adult world, we’re toast.

There’s not much hope for ending war, for example, when two little shorts will engage in a brutal, endless tug-o-war over an eight-inch stuffed animal named “Fop Fop.”

Notice what little boys can do to each other with cardboard tubes that are supposed to be ancient scrolls. I rebuke them: we wouldn’t have any recorded history if all our ancient scrolls were bonked into useless spirals on little boys’ heads! They stare at me, remorse-free.

Peace on earth? Hah. You must not have ever had your eardrums pierced by the shriek of a child whose baby carriage was snatched from her hands by another one who preferred to use it to load cardboard bricks.

Goodwill to men? Hmph. You’ve never held up a picture from a children’s Bible showing the Magi, only to have one little boy decide the bearded one looked sinister, and shout, “I’M GONNA HELP JESUS SLUG THIS GUY!”

So, yes, it’s stressful to work with little children, even weekly or occasionally, on a volunteer basis. My wish for everybody who cares for children full-time is, besides peace and joy and strength and dedication, an adult-size pacifier filled with a steady stream of liquid Godiva chocolate.

But my real wish for everyone is to be around a small child sometime soon because you will always, always learn something. It happened to me recently.

There are special moments with the little people in our lives where their true nature is revealed. In the beauty and simplicity of their innocence we are reminded of the big, big truths that oftentimes they see and we don’t.

It happened as Sunday School was ending. We had learned about how Jesus came as a baby. All the children had enjoyed swaddling a baby doll, giving pretend baths, and dressing, cuddling, feeding and caring for babies.

As one little boy who was a bit of a handful left with his parents, another one raced over to me and tugged on my sleeve. Red-faced and urgent in his buzz cut, plaid shirt and clip-on bow tie, he guided me over to the wastebasket, which was taller than he.

He said he had watched the other boy “put a baby in there.” Enormous outrage and grief were in his voice.

I crouched down to his eye level, swung open the wastebasket door, and retrieved the plastic doll. “Here’s the baby,” I told him gently. “He didn’t realize what he was doing was wrong.”

As I stared intently into his eyes to make sure he felt better, I couldn’t help thinking about the whole abortion mess. It was such a parallel.

But he was still upset. “He threw Goofy’s leg in there, too.” A tear spilled over and ran down his cheek.

Turns out the other boy had also thrown several pieces of Disney wooden puzzles into the wastebasket. Maybe this was the best teachable moment of all. I plunged my whole arm down into the trash and fished out several puzzle pieces, including, indeed, Goofy’s leg.

The little boy looked at me solemnly, intensely, and said:

I nodded in agreement, and smiled. “No, but Jesus likes what YOU did.”

I instantly thought of the whole big mess we adults are having over abortion and the morning-after pill which quite often does destroy human life after conception. We are arguing over medical research on fetal tissue, embryonic stem cells, cloning and many other tough issues involving life, death, illness and health. Within these controversies are positions that align with God’s plan and provision. Other parts of them, however, are places where we need to draw the line and not cross it, no matter what.

How I wish adults would treat human life in all its forms with the same concern and compassion that that little boy had for the plastic baby doll and the little wooden puzzle piece that was Goofy’s leg.

We put it back into the puzzle. Now Goofy is whole! We put the baby doll back into the pink plastic cradle. Now she’s happy! We shared a little hug. And the wise and compassionate little boy went off with his mom and dad.

But the lesson stayed with me.

How it stayed with me.

Life comes down to its defining moments, doesn’t it? Whether it’s in the halls of politics, the laboratories of science, or the Sunday School rooms with little human dramas being played out by little humans, everything starts with where you stand.

The value of life, all life, was defined for me, clearly and simply, by a little boy who knew enough to judge a situation based on what Jesus would think.

That’s why I teach Sunday School.