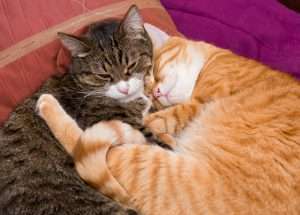 Yea, the stork in the heaven
knoweth her appointed times;
and the turtle and the crane and the swallow
observe the time of their coming;
but my people know not the judgment of the Lord.

Got cats? Then you’ve got drama. They’re like that. We’ve had several cats, over the years. We live around a lot of horse barns, and with them come a lot of barn cats. They’ve got their own ways. It’s taken me years to catch on.

One neighbor’s barn cat leaned on lampposts and wore black net stockings. No, she didn’t, but she does hold the neighborhood record for the most kittens birthed in one year: 20! One became our own Pumpkin. Every day, striding regally like an orange powder puff, she inspected our neighbors’ yards, and returned for her power nap. Everyone loved her.

One night, though, I had a strong premonition. Something woke me up in the middle of the night. I sat bolt upright in bed, all upset, and didn’t know why. Eventually, I fell back asleep. Next morning, we found out that at that very hour, Pumpkin had met a cruel fate, trapped in a fenced-in area with some fierce hunting dogs on the next block. Our neighbors heard it and noted the time. They were very apologetic. We were crushed. My wakening that night was amazing. But then again, not so very.

That’s because we are talking about cats. They’re mysterious.

Pumpkin’s barn mate, black-and-white Patch, eventually disappeared, too. We think she got lonesome and took squatter’s rights in someone else’s barn.

Meanwhile, the neighbor across the street moved, and left someone behind: Fat Louie. He was chubby, white and orange. First, he tried to live with the tough lady barn cats across the way, but they drove him out. So he showed up at our barn, which at the time was cat-less. He was a quiet, pleasant presence.

What is it about me and cats in the middle of the night? Once when I was going through something difficult, I woke up at about 2 a.m., felt sad, and couldn’t go back to sleep. I went outside to sit under the stars and think and pray and fume. I started to cry, in my little private pity party.

Well, here came Fat Louie. He dumped himself on my lap, as if I had any choice. He was purring up a storm, forcing me to pet him. Pretty soon, he was purring, and I was petting, and no longer weeping. I felt better. Somehow, he knew that was just what I needed. He has never shown me an ounce of interest since, unless I brought food.

We also had Tigrrrr. She came to us as a charity case, skinny and small. Unfortunately, our horse Zippy stepped on her. That made her a flat cat from her shoulders back.

The vet kind of hinted that maybe we should put her to sleep. After all, she was a barn cat and we got her for free. But did THAT make her worthless? You know the answer. We gritted our teeth and paid the vet $250 to fix her up. The whole neighborhood shook their heads at her full-body cast. But for many years afterward, she was as good as new, and we were happy.

I love to tell our very first cat tale. When we bought our acreage here at Mount Laundry, there was a large, orange cat who came as part of the deal. Hamlet had been living in the barn when the people before us bought the place. They said he was at least 17. He was the calm, collected king of the property. He let us live with him for a year or so.

Then one day, I found him on the tractor seat, dead. Oh, Hamlet! I panicked that there might be poison in the barn. So I took him to the vet for an autopsy. Nope! Hamlet just died of old age. We laid him to rest.

About a month later, I walked into the barn and almost stumbled on a large gray cat laying on the tack room floor. Dead. I panicked again: maybe there WAS poison in here! No collar, no tags. We took the gray cat in to the vet for another autopsy.

Verdict: also natural causes. The cat was a female, about 18 years old, the vet said.

A longtime neighbor put the pieces together for us. Turns out the gray cat was Hamlet’s sister. They had been litter mates in our barn two homeowners before. When they grew up, Hamlet stayed, and the gray cat migrated on; no one knew where.

Somehow, though, when it came time to die, she came back to the place she’d been born.

Incredible! It shows that there’s a lot more going on with cats than we know.

I think cats may be God’s way of introducing us to mystery, so that we’ll recognize and respect it in our fellow human beings.