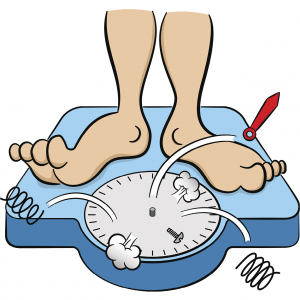 Behold, I will do a new thing;
now it shall spring forth;
shall ye not know it?
I will even make a way in the wilderness,
and rivers in the desert.

It all started when I was plotting my next move, chocolate-wise. I was driving my car on a busy Omaha street. It was snack time. Of course, for me, every time is snack time.

I checked my coordinates. A Wendy’s Frostee was six blocks away, that way. Good. Very good. But wait: there was a drugstore right over there with those luscious Baker’s chocolates made fresh in nearby Greenwood, Neb. Hmmm. And in the air: Dairy Queen pheromones!

All of a sudden, I saw a very, very fat lady waddling down the sidewalk, and simultaneously, the sound of a screaming siren as an ambulance sped by.

I felt as though my eyes were being supernaturally focused on that poor dear lady’s obese state, and my ears on the warning siren.

Stop, look and listen, Pudgy. If you keep on eating snacks and sweets all the time, you are going to look just like her.

IT WAS A FAT EMERGENCY!

Every once in a while, the Lord’s perfect timing and perfect sense of humor get my attention.

I cranked the wheel and laid scratch the other way from the chocolate temptations. I went forth, and chocolated no more. At least, not that day.

But that’s not what finally got me on my first and, I hope, only diet of my life. It was the sight of a dignified friend of ours, an august banker. He had lost so much weight that his khaki shorts were literally hanging on him. His belt was on the tightest hole but it was still worthless to keep his pants up.

He looked as slim as a teenager.

In fact, someone joked that he would attend the next annual meeting of the Nebraska Bankers Association with three inches of his plaid boxer shorts showing above his low-riding gangbanger shorts. He would be in stark contrast to all those other guys in stiff, starched, conventionally-belted three-piece suits.

That’s what I wanted!

Our friend was ”doing Atkins,” the popular low-carbohydrate, high-protein diet. I watched him negotiate a buffet table; his plate was full. He seemed un-deprived. Not cranky. Not wasting away. In fact, he was downright happy with himself.

Since then, I have lost 20 pounds. Twenty! Do me a favor: go to the grocery store, and stack up 20 of those pound packages of stick butter. Lift them up and see how heavy they are.

It’s so nice to collect compliments again, as people realize they are seeing less of me. The only weight-related experience as fun as this was after giving birth to our four whoppers. I felt like I was in a great, big colander DRAINING for a couple of days afterwards, losing excess poundage by the fluidal fell swoop.

It’s like that on Atkins, at first. By cutting out carbohydrates, especially sweets, I lost 13 pounds in the first 14 days. This laid bare my old assumption that I was fat after having four children because pregnancy had slowed my metabolism ‘way down.

Baloney! Chocoholism had slowed my metabolism ‘way down. According to the Atkins book, my extra-rapid weight loss in the first two weeks showed that my metabolism is in apple-pie order, as long as I don’t eat too much apple pie.

It gave me hope. I kept it up. I re-learned the old lessons about self-control, and the rewards that come from it. They exceed anything the material world has to offer, by far. There’s nothing as fun as losing weight and resuming your spot – maybe not on the Hottie List – but at least on the Okey Dokey List.

You know that recipe for a chocolate dessert, ”Better Than Sex”? Well, guess what? THIS is ”Better Than Chocolate.”

Two handfuls of flab are gone from my waist. My arms no longer look like hams. I have a neck again, instead of a hulk between head and shoulders, like a Cornhusker lineman. I can now look in a full-length mirror and not sigh or cringe.

Forget Harpo. Forget Groucho. Call me Carbo! Happy to be less of a load. †