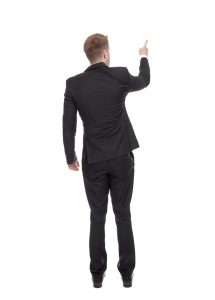 He’s mentally retarded. He’ll never be a CEO or a physician or the President.

He’s already better off. Why? Because unlike a lot of very smart people, he has his priorities straight. He is uncommonly focused on family, friends and faith.

David makes us all proud.

One time, he and his mother attended a lovely wedding at a big Catholic church. Right off the bat, he noticed something was different. In Protestant churches, like his own, the Cross up above the altar is always empty. That symbolizes the victory of the Resurrection. Man’s worst couldn’t keep God’s best from winning out.

But in Catholic churches, the crucified Christ is often depicted in living color as a human figure on the Cross up front. It’s the crucifix. Christ is presented as a reverent, life-size mannequin or statue. It’s intended to emphasize Christ’s suffering, an inescapable reminder for all to see.

The mother didn’t even notice the difference between the empty cross at their home church, which is Protestant, and the one bearing Jesus at this one. But David did, right away.

Amid the baroque organ prelude and the polite whisperings of the guests who filled the church, David gaped at the Cross and the slumped Savior hanging from it.

Then he stood. And pointed.

And said, boldly and forcefully, “He WOSE!”

He has a bit of a speech impediment. At first, people didn’t understand.

He persisted. He kept pointing at the figure on the Cross. “No! That’s w’ong! He WOSE!”

The wedding guests stirred, then tittered.

His mother, smiling, more amused than embarrassed, tugged at his coat to urge him to sit down. But he wouldn’t.

Finally, David sat down. But he never backed down on his point. Why should he? He was right. Jesus isn’t still stuck on that Cross, by golly. Far from it.

Nobody made fun of him or thought it ruined the moment. Everyone smiled.

And everybody learned something that day from David, the simple-minded boy with barely half the IQ of most of the wedding guests.

Just as David the shepherd boy had only a few rocks with which to fight Goliath, our modern-day David doesn’t have a lot of weapons or armor. He lacks the big vocabulary, rhetorical skills and theological training to back up his argument. Our David wears nothing but a loincloth, intellectually speaking. No way could he go toe to toe with the Goliaths of learned society, on their terms.

But both Davids kept it simple, trusted God’s word, stood up for what they believed in, and acted with courage.

My young friend doesn’t know half as much as most young people his age. But he knows the things that count. We should learn from him.

Lots of us who are gifted with intelligence miss what’s best and what’s true, in the fast-paced complexity and elaboration with which we fill our minds and lives. We get entranced by the busy-ness and never take time to reflect on what really counts.

Meanwhile, there are the Davids of our world, quietly in focus, reminding us of what’s really important in life: what we need to see, and must not miss.

The mark of a great civilization is valuing and honoring its weakest citizens. In their simplicity, we see great beauty and truth.

Later that day, when the bride heard what David had said right before she came down the aisle in her moment of glory, she wasn’t upset. She thought it was sweet. She gave him a little kiss on his forehead, and ruffled his hair. He blushed.

Thanks for reminding us. Every time someone does, His love wises again in our hearts. †