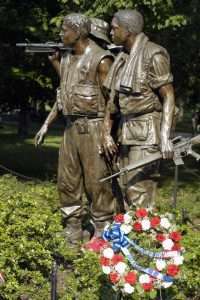 And then I met Joe Guts, man of war. Now I know what real strength and courage look like.

That’s not really his last name, of course. It’s a name I gave him. He has passed away now, but to me, he symbolizes all war veterans of this great country of ours. They had guts. They stood up for us.

Joe was a shriveled up little guy who lived a few blocks from us. He had so many health problems that he was pretty much stuck at home in a hospital bed, contacting the outside world mostly by telephone and fax.

He got that way because of me.

He was over in Vietnam, risking his neck so I could continue to live my cushy, clueless life of liberty and privilege, like so many other Americans who tend to let Veterans Days come and go with barely a thought.

Joe used to be a comic-book style hunk who could bench-press 300 pounds and leg-press 500 pounds. A Boys Town graduate, he volunteered for the Navy at the height of the Vietnam War. He got special-ops training, and became a river rat, engaging the Viet Cong in firefights along rivers in the Mekong Delta.

He didn’t like to talk about it much. But his stories were riveting and poignant, magnificent and sad. It took him years to figure out why he couldn’t stand to take hot showers; it reminded him subconsciously of those dangerous days.

He has been tortured by flashbacks, recurrent dreams and debilitating depression. Not even his two Purple Hearts and other awards could ever cover up the horrible memories of war that battled on in his mind and heart years later.

Joe got shot in the knee, got shrapnel in his back, saw buddies blown away, and had little kids melt dead in his arms after being napalmed by the Viet Cong.

His own health was nuked by Agent Orange, the defoliant that our side sprayed on the jungle to clear out the undergrowth and help us fight the guerrillas. It was a paradox: the toxic chemicals helped with visibility which might have saved lives in the short run, but stripped many of our soldiers of their lives and their health, long-term. It was a chilling precursor to the chemical warfare that so many fear today.

Because of Agent Orange, Joe lost most of his insides in surgeries in 1984. They removed 85 percent of his intestine, his ileum valve and a lot of his colon. His pancreas was diseased, his stomach and gallbladder were gone, and he had recurring blood infections.

He had to go on intravenous feeding for years and lost 100 pounds because nutrients streaked through him so fast. He slipped into eight comas, and was too weak to walk or work for many years. He could get around in an electric cart, when he could get a ride in a big enough van to go somewhere.

He had had pain all over, from top to toe.

It was a struggle to raise four children on disability income. When they were still pretty small he lost his beloved wife to breast cancer. He slipped into alcoholism and eventually made his teenage son drive him to stores late at night so he could roll down the lonely aisles in his wheelchair and buy himself root-beer schnapps, vodka or even Nyquil, which he drank for the alcohol content.

His dental health was shot, his sex life was a distant memory, and he struggled with self-esteem problems most of his adult life.

Physically, he was practically “gutless.”

But I’ve never met anybody with such inner strength. Such guts.

You could see it in his humor. He kidded people that his digestive system was now so short that when he got hemorrhoids, his nose would bleed.

It would have been easy to give up when his health went. But he didn’t.

It would have been easy to give up when his wife died so young. But he didn’t.

It would have been easy to just drift to his death as an alcoholic. But he quit drinking and helped others quit, too.

It would have been easy to wallow in self-pity at his disabilities. But he fought for and won better handicapped access to many local buildings.

It would have been easy to get angry at the USA. But instead he was a tireless advocate for his fellow veterans, helping them get their records in order and their rights in place. He was largely responsible for recruiting 350 volunteers to bring the traveling Vietnam War Memorial to Omaha one weekend, which 75,000 people came to see.

It would have been easy to get mad at his fellow man. But Joe did the opposite, as a faithful visitor to the local nursing home and a leading volunteer for the Boy Scouts of America, tirelessly giving his time and money to inspire and guide youth.

It would have been easiest of all to get mad at God. And Joe did. But he also came to terms with what happened to him. After all, he got out of there alive; many others didn’t. He saw God’s purposes in all that he went through.

“When life is at its worst, God is at His best,” Joe said.

He shared his faith as the first handicapped Extraordinary Minister of the Eucharist in the Omaha archdiocese. He taught confirmation for years, with a special interest in special-needs kids. He challenged them to set goals and go beyond their limitations.

Once, he was sent into a nursing-home room to give communion to a really angry, lonely, elderly lady. She had just found out she had terminal cancer. She was facing the wall in her wheelchair when Joe arrived in his electric cart. He introduced herself. She sat still, then spun around in her wheelchair, and spat out: “Do I have to take the pain with me?”

Joe’s eyes locked onto hers. He surprised himself with his calm answer: “No.”

A slow smile of relief spread across her face. Someone had listened! Someone understood. At the same time, Joe felt as though his insides were filling up with joy. He realized at that moment that his pain was only earthly, too. You know the empty place where his guts used to be? It was filled again. Filled with faith.

The old soldier had done battle once again.

And once again, he had won.

I went to see Joe on a couple of Veterans Days. I would bring him a flag, and maybe a flower or two. I heard another one of his stories, and touched his hand, and looked into his all-American eyes and told him, hey, Joe, by the way, thanks, from me and a couple of hundred million other Americans.

He passed away not long ago. I’m still thanking him. I am positive he is in heaven. If anybody makes it there, he will.