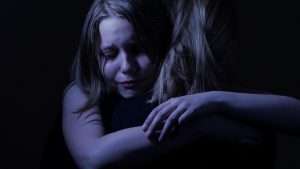 (T)hat we may be able to comfort them
which are in any trouble,
by the comfort wherewith we ourselves
are comforted of God.

You’ve got your football moms. They have to sit out at night on those ice-cold bleachers and take a night class in chemistry to figure out how to get those stains out of the uniform by next game.

You’ve got your cross-country moms. They have to make vats of pasta every week for optimal carbo-loading. They only get to see their darlings dart away at the start, and stagger across the line at the end, with no visible action in between.

You’ve got your volleyball moms. They have to sit in a stuffy gym and watch kids stick their armpits in each other’s faces. You’ve got your tennis moms, who get neckaches from watching long volleys and the occasional pain-in-the-neck racquet-wielding prima donna. You’ve got your cheerleader moms and your band moms, whose kids are away so much they could sue the school for alienation of affections.

But then you’ve got your golf moms and your softball moms.

Golf moms have it the easiest. We get to be outside but only in very nice weather. We are serene and classy; we cannot scream and yell and jump up and down, at least not until we get home. The fact that golf is based on an objective score removes a lot of the ugly parent tantrums that mar many sports today. With golf, there’s no ref to make bad calls, no coach’s pets, no enraged parents making a ruckus over who’s starting and who’s not.

It’s just the girl against the course: pure athletics. All we parents have to do is master the polite golf clap. Your daughter hits a good shot, and you vibrate one polite hand against the other in her general direction: “pit pit pit pit pit.pit pit pit.”

Oh, we joke a lot about what we COULD do: let the air out of the tires of the other team’s pull carts . . . train the squirrels on our home course to abscond with the other team’s balls . . . serve beef SHANKS to all golfers except our own as a snack at the turn. . . .

But it’s over now, and I’m sad. I’ve been a golf mom for six years with two golfing daughters. Both managed to play Number One for their respective high school golf teams. The one who’s a senior now just competed in her fourth straight state tournament, met her goal of finishing in the top 20 places, and led her team to their best showing ever at State, ninth place in Class A.

But she thought she played lousy.

She got into tree trouble and missed a few putts. You could see the flush build up on her cheeks. No amount of pit pit pit’s could get her back into the zone. At one point, she buried her face in her golf towel for a lot longer than if she were just wiping off sweat.

These are the moments moms and dads are made for. There are a lot of reasons I’m grateful for youth sports. But the opportunity for us parents to comfort, soothe, encourage and love our children in defeat and disappointment, and turn the ashes of defeat into the gold of character development, is one of the best experiences of parenthood.

I gave her the longest, closest mother-bear hug of both of our lives. Even though she’s 17 and oh! so competent and independent, I could feel her relax and sink into me and accept my murmured consolations just like a little child. It’ll be OK. I’m here for you.

That’s how Jesus feels, when we come to Him with our suffering. No doubt.

Then there’s my other role this fall: softball mom. It’s over for the season, too, with a 27-5 record, a district championship and a good run at the state tournament last week.

I was a beginning softball mom this season. Our daughter is just a freshman. All I knew about softball parents was that one time, involving another team at a tournament in another city, a bunch of girls AND their parents got into a dog-pile / fistfight that some friends of mine literally had to back away from and sneak to their car in the parking lot. That was not only to avoid getting slugged, but also so that their own fellow parents wouldn’t see that they were ducking the action.

But our softball team’s parents had so far suppressed their sociopathic sides. The veterans taught me well: decorate lockers and stuff goodie bags before every tournament. Add signs and glass paint on the bus for end-of-the-season competitions. Most of all, master the fine art of that concession-stand culinary masterpiece, the Frito Pie.

(OK, all you nonsoftball-mom lightweights: slit open a bag of Fritos, lob in two scoops of hot chili, sprinkle on some shredded cheddar, and serve with a spoon. Ballfield gourmet! Eat your heart out, Martha Stewart.)

This team had lost its all-state pitcher to graduation, had only three seniors, and wasn’t expected to do much better than .500 this season. But they were good athletes and they worked hard. I loved to watch the infield come to the mound after each out and then turn and do an elaborate routine of high-fives, twists and turns to take their positions. They looked like stunning gazelles out there. They were unified, they had fun and they loved their coach. They overachieved and made it to State.

But one-run losses in two squeakers that went into extra innings, including one by the two-time defending state champions, knocked them out.

At game’s end, I wound my way through the crowd to where the girls were already engaged in that teenage girls’ ritual: lots of sobbing, and long, lengthy, shifting group hugs. It was different than what happened after all those wins. Then, you would see quick hand-slaps and bright smiles, and then everybody hurried home for homework or whatever else was on the to-do list.

But this was the last game. The loss ended the season. The seniors were done.

They gathered for their last huddle. My daughter said she tried to keep a stiff upper lip but it felt as though her eyes had two huge faucets like at a water treatment plant. When Coach said, “I couldn’t be prouder of you girls. . .” both of her faucets opened wide and tears gushed uncontrollably.

The huddle broke up. But nobody left. Everywhere I looked, I saw parents hugging parents, brothers and sisters hugging players, coaches hugging wives, boyfriends hugging girlfriends, and most of all, moms and dads hugging their daughters, who morphed from amazons back into little girls, leaning in to them to accept their murmured consolations.

I gave the Gushing Freshman the biggest, closest, wettest mother-bear hug possible. Millions of encouragement molecules transferred from my heart into hers. She sighed a long, slow sigh, and melted into my embrace.

Loser’s hugs are the best hugs . . . because they last the longest and mean the most.

All this, and Frito Pie, too?

Softball is a blast.

When’s the first practice for next season? †