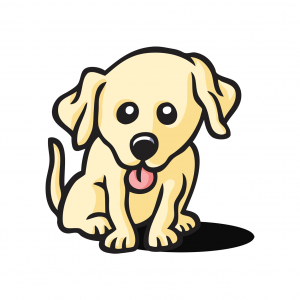 A righteous man regardeth the life of his beast:
but the tender mercies of the wicked are cruel.

When our black Lab Shadow died at age 12, I said, “That’s it. My heart is broken. It will never have room for another dog.” We are big animal lovers. But Shadow was such a great dog, we didn’t think another one could ever measure up.

Well, that was then. This is now. Suddenly, there’s a blonde whirlwind in our house that barks and wags and chases her tail. Our new puppy sleeps in Shadow’s old kennel in the laundry room, with the dryer for a lullabye and a chewbone for a pacifier.

Suddenly, there’s room in my heart — plenty of room — to welcome a dancing spot of sunshine who came to us on a drab winter day.

We’re calling her “Sunny,” because she’s a Lab like Shadow, only she has tawny golden fur, and a bright, happy personality to match.

Funny how a dog makes a family complete. Funny how sharing your life with an animal makes you a better human. Funny how day-to-day irritations and stresses melt away in the wriggling and licking, prancing and pouncing.

She fake-barks, investigates, worries a corner of the rug, and then plunk! She’s beat. She snuggles into your chest and falls asleep on the spot. You see those whiskers coming out of her eyebrows, pat that puppy tummy, smell that puppy smell and . . .

. . . you’re smitten. I’ve never known anyone who can resist.

We had to get her on her 49th day of life. Not her 48th; not her 50th. My husband, you see, has a new book. It’s about training bird dogs. It’s fussy about details, like dictating the actual day you start training a puppy into a hunting marvel. Timing is everything, they say. So we’ll see.

They had to peel me down from the ceiling. Turns out it was a blank that he accidentally dropped from his new pistol that shoots blanks only. I was mad enough about him loading a gun in our house, but what good is a blanks-only gun when you are pheasant hunting? Was he going to SCARE them to death?

Noooooo. He planned to fire a blank when Sunny eats for a few weeks. It’s her happiest time of the day. So she’ll associate the loud noise with something good, and won’t be gun-shy. So much for our elderly neighbor’s nerves, though, huh? Sigh. He read about it in that book. But hmmm. Maybe I should rush to the market with a book of my own: The Gunfire Diet. How to get a bang out of losing weight. It could work!

There’s more. He got special batons to throw into our neighborhood pond to train the dog to retrieve (like a stick won’t work?). He got a huge net bag of eerily realistic duck decoys, two of which wound up in our tub (what’s a bath without a ducky?). He even got a realistic-looking dead bird wing.

How have we survived this long without a fake dead bird wing in this house? Every time I open the cupboard where he stores it, I freak.

Also, he recently bagged 18 quail on a hunting trip with friends. Sunny stayed home because she’s not ready yet. However, I have been informed that I may have to keep one or more of them in our freezer for training purposes for this dog. You know, right between the popsicles and the leftover chili. Ewwww!

But indications are that she will be a fearless, well-trained hunter to make his occasional outings as a macho man more productive and fun.

Most of the time, though, she’s going to be my companion and my best friend, just like Shadow. She already naps at my feet when I write or do dishes or try to walk anywhere. I’m the one who calms her when she’s yipping and holds her snout when she’s nipping.

If only it were that easy rearing teenagers.

Our daughter Maddy is smitten, too. She carries Sunny around like a doll, chills out on her sheepskin with her, and runs to fetch HER toys instead of the other way around.

The other day, I saw that Maddy had unplugged her nightlight from her own room, and put it in the outlet near Sunny’s kennel. “I didn’t want her to be scared in the dark,” she confided.

The nightlight is a white ceramic angel. I got choked up, since Maddy always says Shadow is an angel now.

I bet Shad-dog is watching us fall in love again, just like we did with her. It’s a testament to her that we don’t think life is any good without an animal friend in the house. She was quiet and always near, like a shadow, while this new puppy is louder and much more hyper. She reminds me of dancing sunlight on rippling waves.

Yes, in our lives, the shadow came before the sunshine . . . and both of them came with four feet and a waggedy tail. †