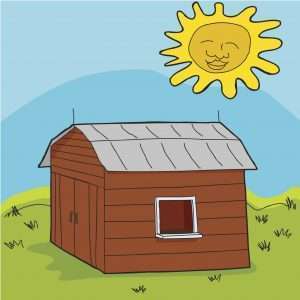 There I was, down on my hands and knees on a cold, rainy, autumn Saturday afternoon, scrubbing a really grungy concrete floor with disinfectant so strong it curled my nostril hair.

Me? A college graduate who once wore white satin elbow gloves as a debutante?

Well, it might have been a lowly job – but it had the highest purpose.

After a long softball season, I was shutting down the concession stand in our city park. The tiny building, run by parents to make money to support sports teams, became my home away from home this fall — spider webs, concrete block walls, bare overhead lightbulb and all.

I had been outfumbled by the other softball moms into running it. They were younger, nimbler, and met behind my back to elect me by acclamation . . . the finks.

I hated the assignment. Volunteering, to me, is white-collar, no-brainer tasks. Fun! Easy! Clean!

This job, though, was hard work. Ewww!!!

So I found myself pushing a heavy, overloaded dolly of supplies through a warehouse store, mushing like Nanook in the Iditarod.

My coffee tasted bad. My trick wrist ached. I failed to master the circa 1957 can opener.

It grossed me out to change the flypaper hanging from the ceiling. Worse, I had to fix Frito Pies – blobs of canned chili and cheddar cheese dumped into a sack of Fritos – right underneath those flypaper strips. Ewwwww!!!

I got black knees from kneeling on the filthy floor, and broke three nails and our cooler handle.

Why do I whine about all this?

Because I thought I would hate the job.

But I loved it!

Isn’t that always the way it is? Taking on a tough job that nobody else wants to do can be the best thing for you.

These are the jobs that serve people’s needs . . . and give you a good, strong dose of reality for just how cushy your life really is.

I mean, some people work that hard all their lives. I only had to make it through softball season.

It was a lot of fun, too, with lots of camaraderie. We were playing a pretty good team one night, and one of their fans ordered a chocolate sundae. We exchanged good wishes for the game, but as I was spraying on the Redi-Whip, I said, “This here’s WHUPPING cream!!!!!” She cracked up.

Everybody pitched in, and that was inspiring. Dear friends helped staff the stand, “just because.” Dads made sloppy joes, wings and super-secret chili. One donated a ton of free hot dogs, and another got us day-old buns to go with.

We made almost $1,300 for the softball team, and that was the best of all.

Or maybe it was what happened when I was scrubbing that filthy floor at season’s end on that rainy afternoon. Buckets of black water had gone down the drain. Dead bugs and petrified gum spots had been dealt with. My joints ached. But I ran outside to throw something away . . .

. . . and was treated to a gorgeous, full-size rainbow in the purple sky above blazing red and orange trees.

I almost dropped to my knees in awe, which would’ve been fine, since they were already black from scrubbing.

I knew what this was: heavenly payola for doing a thankless job. I would never have seen it, never been outside at that time of day when it was cold and rainy out.

It was God’s way of making concessions – a little treat to remind me that He’s with me in my glory moments on the mountaintops of life, but also while I’m making Frito pies under loaded flypaper and scrubbing a dirty floor.

Which, by the way, looks fabulous now. Hmm. Wonder if they’ll ask me to run the stand again next year?