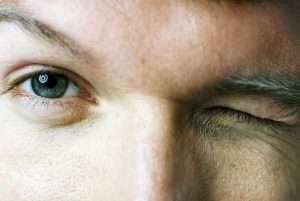 There be three things which are too wonderful for me,
yea, four which I know not:
The way of an eagle in the air;
the way of a serpent upon a rock;
the way of a ship in the midst of the sea;
and the way of a man with a maid.

We just got back from Lanai and Maui, Hawaii, celebrating our 30th anniversary in what has to be the world’s greatest scenery. We snorkeled, we body-surfed, we Jeep-safaried, we helicopter-soared. We watched big sea turtles on a deserted beach, and wandered into the brush to find ancient petroglyphs, painted symbols on big rocks showing a deer, a quail, Polynesian men, and BUD LITE (just kidding on that last one). One of our favorite experiences was riding bikes down the side of a volcano.

I was my clumsy self, wobbling over the yellow line more than once on those hairpin curves, close to becoming a big bug splat on the windshield of an oncoming car. But it was a blast.

Our bike tour leader made it fun. He was like a slim and trim Bill Murray, with eyes the color of flashing blue Maui waves. I was curious, since he looked to be close to our age, yet had a job you’d ordinarily associate with a much-younger dude who was working only for extra cash for surfboard wax and a little, well, “Maui Wowie.”

Turns out he used to have a responsible job on the mainland that required him to get along with people you’d call “stiffs.” Stress apparently caused his blood pressure to spike up to something like 215/140. The doctors told him: change his lifestyle, or sayonara.

So he moved to Maui. He took an enormous cut in pay with the bike job. But quickly, with his outdoorsy job and laid-back lifestyle, his blood pressure normalized. He felt better and was happier than he had ever been.

Then one day, he greeted his vanload of bike tourists – Mr. and Mrs. Elmer Fudd, Mr. and Mrs. Cecil Fleeblegetser, Mr. and Mrs. Milo Herkimer — plus a gorgeous woman named Samantha.

His blue eyes went gaga and his blood pressure spiked, as he gazed at this beauty with no ring on her finger. But how could a guy like HIM get a girl like HER?

The hours drifted by. Coasting down the mountainside was as beautiful as always, the mood relaxed and carefree. All too soon, they were back in the van, nearing excursion’s end, and he panicked. The love of his life would leave and he would never see her again! Time to make his move.

He turned around to address all the tourists, but kept his eyes fixed on her.

“Now, after such a . . . PEAK experience,” he punned, “I usually go to this picturesque establishment on the beach for a margarita. And if any of you . . .” and he leaned right toward her, “. . . would like to come along, I’m buying.”

He maintained eye contact with her, smiling, keeping his tone casual and nonchalant.

Addressing the entire vanload, “That is, if any of you . . .” and he leaned toward her again, blazing his baby blues at her with volcanic strength, “. . . would like to come along.” And he smiled his most engaging smile.

Those blue eyes! She was captivated.

The cautious type, though, she hesitated. But Mrs. Fudd, Mrs. Fleeblegetser and Mrs. Herkimer egged her on.

They had a great time before she had to go back. And so began a long-distance romance via text messaging. Within weeks, he flew to the mainland and proposed in the airport before 200 strangers who gave them a rousing “golf clap.”

She moved to Maui, and they lived happily ever after as man and wife. 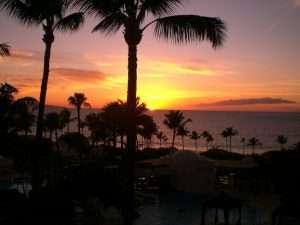 And they sailed off into the sunset. (Photo by Dave “Wikiwiki” Williams)

Don’t you love it? Let’s thank God for giving every man a special power to woo that special woman He wants him to have. Each guy gets something a little different.

For our new friend, it was those eyes, as blue as the flashing sea, speaking the wonderful and mysterious language of love right into her heart.