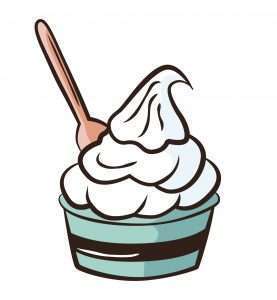 And when ye will offer a sacrifice
of thanksgiving unto the Lord,
offer it at your own will.

You know how cool and sophisticated you feel when you get to travel on business? For many of us, it’s a treat. For others, it’s no big deal. But whether you’re a newbie or a veteran, you need to watch out in unfamiliar circumstances. Your self-image as a canny professional can take a beating.

Someone I love – let’s call her “Janet” – went to Atlanta on business. She worked very hard for quite a few hours. Then she and a coworker got a little free time. They decided to do a little shopping downtown and look cool in the big city.

They came upon a street vendor selling ice cream in Atlanta’s signature flavor, peach. Janet’s coworker got a cone. Janet wanted a little extra, so she ordered a dish. “We have a long way to walk,” the coworker said. “Can you walk with that?”

Janet’s face contorted in disdain. She was the cool babe in the big city, remember? Cool babes don’t spill! “Of COURSE I can.”

Well, they walked along the downtown streets. The friend finished her cone, while Janet still carried her dish and spoon. They came to an escalator. Whoops! Janet stumbled.

Janet pulled the dish off her face. It made a giant sucking sound. The dip remained, like a pastel orange clown nose. In the heat, peach ice cream dripped and dribbled all down the front of her executive blouse and skirt.

An elderly man saw her fall. He rushed over to help. He was, however, a smelly bum. He took out his wallet, which was held together by rubber bands. Hands shaking, he pulled out a tattered tissue. It looked used and very germy. “Here you go,” he offered, helpfully.

She pretended to dab herself with it, and thanked him, stifling hysterics. How can you turn down a Good Samaritan, even a scary, smelly one?

The coworker said, “Let’s go back to the hotel.” No kidding! But that meant they had to walk back on the crowded city sidewalks to the train station, get back on the train, and walk back through the crowded hotel lobby full of non-stained swells.

People stared. They were curious, amused or appalled. Janet started to laugh. She laughed not only at how ridiculous she looked, but at how arrogant she had been,  and how a smelly bum realized he was better off than she was and had taken pity on her with his tattered, germy tissue, and how she would look back on the whole thing one day and realize it been a valuable lesson.

One day a long, long time from then.

And then she made it worse. She got the giggles over the ridiculousness of the whole situation. She laughed so hard, she wet her pants.

People kept staring at the executive lady with the peach ice cream smeared all over her face and clothes, and the wet stains on her outfit in the South Bronx area, and so she laughed all the way back to her room, and all the way home on the plane.

She told the story back home. She’s a vivid storyteller. People had to rush to the bathroom to prevent a recurrence brought on by the hysteria of it all.

At gatherings with her ever since, all someone has to say is “Peach ice cream!” and we all laugh our heads off.

Then we pause to give thanks. No, not for the smelly Good Samaritan who rushed to her aid. No, not for her good attitude about it. But yes: that it didn’t happen to US. †