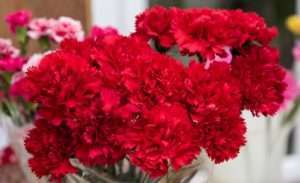 Thou art all fair, my love;
there is no spot in thee.

My parents really did have one of the best love stories around. They were just right for each other, a wonderful match. While they kidded each other a lot, I never heard either of them ever “diss” the other. He thought she was perfect. She thought he was. It’s the way love is supposed to be.

Dad’s been with the Lord for more than 20 years now. But because of something he did on his first date, we always give Mom red carnations on her birthday and for other special occasions. It’s a wacky story:

See, one fine autumn weekend, the guys in dad’s Sigma Phi Epsilon fraternity at the University of Nebraska-Lincoln all planned to drive down to Columbia, Mo., for the Missouri-Nebraska football game. It was the designated “migration” trip to an away game. They all asked dates, arranged carpools, and reserved two big suites at the old Muehlebach Hotel in downtown Kansas City for the weekend, one for the girls and one for the guys.

Mom agreed to go with a Sig Ep mainly because he had a cool convertible. Dad had some other date. The young people all gathered in the fraternity parking lot to depart. Well, Mom had a pea shooter. (Don’t ask. . . .) She thought Dad was pretty cute. To flirt, she shot Dad in the back of the neck, not once, but twice. His hand would fly to the spot that stung, he would whirl around and look at her in fake distress, and she would smile coyly.

So they got to the hotel. The girls were staying in one big room, and the guys in another. But late in the evening, the guys were all crowded in the girls’ sitting room area. The lights were low. There might have been some hand-holding going on, but truly, that would have been the apex of saucy behavior in the late 1940s. Mostly, it was exciting enough for them to be in the same room together.

But Mom wasn’t all that enthralled with her date. And she really didn’t like seeing Dad sitting next to that other girl. So she jumped to her feet, snapped on the bright lights, and announced, “It’s time for the guys to leave!”

They protested, but grudgingly left. Dad caught Mom’s eye, and smiled: he knew what she was doing, and why.

So the next weekend, the Sig Eps had a big dinner-dance. Dad called Mom and invited her. She wasn’t all that surprised. She knew they had a mutual attraction. She then proceeded to bossily tell him what color her dress was, so that he could pick out suitable flowers for her corsage. “It’s aqua,” she told him, “so you’ll have to send flowers that go with aqua.”

Well! That was like flashing a red flag to a bull! Dad would not take that bossiness lying down.

So that Saturday, at Mom’s Kappa Alpha Theta sorority house, the doorbell rang at noon. Flowers for Nancy! But were they flowers that would go with aqua? Nooooo! They were red carnations in a big corsage!

She smiled at his audacity, but was also slightly miffed at how bad the corsage would look on her aqua dress.

At 2 p.m., the doorbell rang again. More flowers for Nancy. Oh, maybe the first delivery was a mistake! She eagerly opened the package. Nooooo! More red carnations! This time, they were arranged in a wristlet.

This time, she was intrigued. One was bad enough. Why send two?

At 4 p.m., brrrring! The florist again. This time, it was a long-stemmed red carnation.

At 6 p.m., another delivery. This long, skinny, red carnation corsage looked like it had been jumped on and run over by a truck.

Mom had her girlfriends pin the red carnations all over her dress in a humorous way. Then the call came up: her date had arrived.

She floated down the stairway in her aqua dress with the goofy red carnations pinned all over it . . .

. . . and there was Dad at the base of the stairs, beaming at her . . . with a corsage of gorgeous white orchids!

Sometimes, you just know. And so now, decades later, every time I see a red carnation and smell its spicy scent, I think of my parents’ funny, spicy romance, and rejoice that, for their personalities, it was perfect.

So if you’re single but want to find true love, take it from a daughter happy to have sprung from such a love story, a match made in heaven. Get yourself a pea shooter, and take aim! †