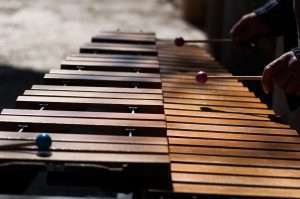 (F)or he hath said, I will never leave thee, nor forsake thee.

Our daughter and I drove from Omaha to Waco, Texas, for her college orientation at Baylor University. It was a road trip to remember.

You need to know one thing: the university is not called “Baylor.” Once you get there, you realize that it’s actually “B-eye-lor.” And if you’re a mom, you’re supposed to wear high hair, red lipstick, a sundress and high heels, not bedhair, no lipstick, shorts and a T-shirt. Get with the program!

On the way down, we listened to a best-selling audiobook that my 70-something mother lent us. It was a sappy romance. We loved it.

But then suddenly, an intense, red-hot, R-rated love scene between ”Suzanne” and ”Picasso” erupted suddenly on the otherwise G-rated audiotape.

You don’t know what ”awkward” means ’til you’ve lived through a moment like that. I blushed because I didn’t want to embarrass Neely by shutting the fool thing off. She blushed because her GRANDMOTHER was the one who gave it to us.

We both reached for the ”STOP” button at the same time, and bumped hands. We laughed and laughed.

When we reached Waco and stopped for dinner, we laughed some more: the waitress was ”Suzanne” and there was an art store a few doors away called ”Picasso’s.” Like the characters in the steamy sex scene!

”Do you believe in coincidences, Mom?” she asked.

No way. Just can’t. I’ve seen too many odd things like that. I’ve had one too many phone calls from someone I had just been thinking about but hadn’t heard from in years, for example. One too many times, I’ve read something in the Bible at night that perfectly framed a situation or solved a problem for me the next day.

Coincidences are teeny tiny miracles, God’s way of letting us know He’s with us, He sees us, He gets our jokes and He’s watching our backs.

The rest of the weekend went great, though I fell asleep in the darkened auditorium during the welcoming video after the long drive, and snored aloud. Neely and I got the giggles and never quite stopped.

At least my most embarrassing moment of all took place with no witnesses. While she was taking a placement test, I took a restroom break. There were two enormous rolls of toilet paper. But the paper was stuck to itself on the roll you were supposed to use. I threaded my hand up and around in there trying to get a piece loose, but couldn’t.

For a moment, my arm got stuck, but picturing Neely’s face if they had to call the Jaws of Life to get it out and it made the front page of the local ”pie-per,” I managed to pull free.

So then I switched to trying to pull the trap door down to get the other roll going. I must have been pulling on the wrong end because suddenly the whole restroom cubicle wall was wobbling and about to fall over on me.

Finally, I got it open and got some paper to come out, but just as I did the faceplate of the whole thing, apparently loosened in the battle, fell with a mighty ”clank!” onto the floor, followed by the whole roll, which of course unraveled its way out of the stall, along with my nerves.

I loved meeting the Texas mothers, though. They were warm and winky. They wore spike heels, had expensive sweaters tossed casually over their shoulders, poufy hair and eyeliner, and all of this at 8 a,m. ”Hah, y’all! We’re from Beaumont and we have a beach home and a ranch out in East Texas. What’d your-all’s dodder get on the Ess Aye T?”

Only in Texas: we met a French professor whose first name is ”Lulabelle.”

Only in Texas: we saw a woman pictured in a local magazine identified as ”Gary Beth.”

It was a fun time, very busy and very productive. But there was one very scary moment.

On the last night, after dinner, we stopped by the motel lobby for Neely to use the computer to check class schedules. Then we headed back up to our second-floor room.

A young man made a beeline toward us as we waited for the elevator. His eyes went ga-ga over Neely as he passed by. He did a neat 180 and was suddenly walking in front of us. He started up the stairs, but when we turned to go into the elevator, suddenly he was in there with us.

He turned and started talking to us, staring at Neely’s blonde Yankee beauty. His deep Southern drawl was very hard to understand. He seemed a little too friendly. Actually, scary-friendly.

The elevator opened. We edged down the hallway. He came with us, still chatting.

I suddenly got scared and became conscious of our purses, slung over our shoulders. We were easy pickin’s. Was this a set-up for a robbery, or worse? Here we were, a mom and a daughter, hundreds of miles away from our bodyguard — my husband, her father — who was back home playing Mr. Mom for the weekend, no doubt at that moment being terrorized, tied up and tortured by our 3-year-old, and unable to come to our rescue in any event.

I stopped cold, still several doors from ours, because I didn’t want this threatening person to know our room number. I expected there’d be three or four young toughs appearing around the corner any second with numchucks, knives and handguns.

The simple but urgent thought flashed: ”Help us, Lord.”

I tried to think of some way to get rid of him without hurting his feelings, on the off chance that he really was just a lonely and nice young man.

So I did the only thing a mother could: I turned to him with a bright smile and acted like a complete dweeb.

He had said he was a musician who had just ended a gig at Branson, Mo. . . . suuuuure! . . . and said something unintelligible about what kind of music he played. It was a style I’d never heard of. It sounded like really bleak urban punk with lots of cuss words and stuff.

So I faked it. I pretended that he said he played the marimba. You know, what we use to call the xylophone. ”You play the marimba?” I interrupted with delight. ”I LOVE the marimba!” I beamed at him with my gloppiest, dweebiest mother’s smile.

He kind of backed away, his face contorted with confusion and revulsion.

Neely and I dashed down the hall past our room, and at the end of the hall, looked back to make sure he was gone. Then we dashed back into our room, locked the locks, chained the chains, and cowered. Neely couldn’t believe what I’d said, but at least it’d gotten us out of a sticky situation.

Nothing happened for a while. Later, there was a knock on our door. Neely peeked through the peephole. It was him. Twin heart attacks! We were so afraid! We didn’t make a peep, though. He went away.

The ride home was uneventful, except for another giggling fit over the ham and egg grilled sandwich on the menu at Denny’s in Wichita.

Neely, a teenage sophisticate who has taken five years of French, looked at the picture. ”What is it, some kind of a ‘croques monsieur’?” That’s a very fancy French sandwich she had made for us one time.

The sheer contrast just made me laugh more because noooo, this sandwich was ”Moons Over My Hammy.”

I’d forgotten all about the near-mugging when we arrived very late at our hotel room in beautiful downtown Emporia, Kan. I picked up the obligatory visitors’ magazine left in the room.

It opened to a picture of a guy playing the marimba.

Remembering my bluff to the possible mugger, a slow smile spread across my face and stayed there.

The dude playing the marimba was with the Emporia State University music department. He looked like a total dweeb. He looked, in fact, like the kind of a guy who would get his arm stuck in a toilet paper dispenser and eat ”Moons Over My Hammy” sandwiches.

I mean, look: there are something like 600 musical instruments in the world. What are the odds that that article would feature a marimba?

I knew it was the Conductor’s way of letting us know that He had been right there, all the time, orchestrating our escape with the Spirit’s whisper to me of what exactly to say, to extricate ourselves with grace.

But, oh, Lordy. Don’t y’all never fix to mess with no child of God, neither.