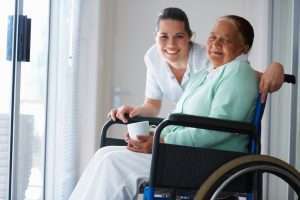 In the day when I cried thou answeredst me,
and strengthenedst me with strength in my soul.

This Wednesday, a girl I loved should be turning 21. She should be in college, making plans for spring break, and toasting her friends with her first champagne.

But Cara was born with an incredibly difficult heart defect. Although her family and medical team did a heroic job of extending her life ‘way past the initial prognosis, a year ago, she died.

She had one of the biggest funerals in Omaha history. But I couldn’t go. So my friend Chris, who had prayed hard for Cara, went in my stead.

She sat with her husband in the second to last row. As the service was about to begin, Chris became aware of someone getting seated behind her. She sensed that she should turn around.

It was a woman, looking at the funeral program with a picture of Cara holding a yellow rose.

You see, Chris’ son Trevor was born, four months before Cara, with a serious heart defect, too . . . and Jenny had been his cardiology nurse.

Through the years, Jenny had remained Trevor’s nurse, so devoted that she was like a second mother to him.

It finally dawned on Chris that both young heart patients must have been patients in the Pediatric Intensive Care Unit at the University of Nebraska Medical Center. Had Jenny been Cara’s nurse, too?

She nodded, eyes filling with tears.

Chris knew just what she was thinking: Why did Cara die, God? How did we fail? We did our best! We fought so hard!

Chris realized that she and Trevor must have sat in medical waiting rooms alongside Cara and her mother a number of times, but they never knew it. Now here they were, connected once again, through Jenny.

The service began. It celebrated Cara’s life, how much she had touched everyone she came in contact with, how many souls she had led to Christ, and how many hearts she had cheered with her sweetness and strength.

Everyone felt better. Everyone said it was the most beautiful funeral they’d ever attended.

Then it was over. People filed out, row by row.

Chris noticed that Jenny held back in the pew, overcome. She went to her. They hugged, tight.

Chris suggested that Jenny read Psalm 139. It reminds us that God knows each of us before we are born, and has His hand on us through all of our days.

Seeing the yellow rose in the picture with Cara and wanting to cheer up Jenny, Chris told her how much Trevor had loved flowers when he was little, and how the doorbell would ring, and it would be him, holding a dandelion in his grimy fist for her.

Jenny smiled through her tears.

Chris could tell Jenny needed some good news. So she told how Trevor was tall and strong now, his heart in good shape in more ways than one: he was in love and was getting married.

But why, God? Why did Trevor live, and Cara die? The question pounded in both their hearts.

Chris told Jenny this: we can water the flowers God entrusts to us, and weed them, fertilize them, mulch them — but when God chooses to pick a beautiful and fragrant one and bring it close to enjoy, it is His choosing and His timing. We must trust Him in that. Have to. Can.

Chris knew why she, of all people, was sitting in front of Jenny at that funeral. It was God’s way of telling Jenny: no, you didn’t fail. You did your job beautifully. You were My hands, for Cara. You were part of a great plan, an eternal success. Look at Trevor: another life you touched, and his life continues, on this Earth.

Jenny smiled once again, this time with acceptance.

They walked out of the church arm in arm . . . not one nurse, but two. One medical, one spiritual. Both were completing their assignments of loving and caring . . . one for the body, the other for the soul. †