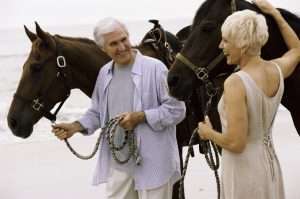 Love never fails.
—    1 Corinthians 13:8a
If you’re a fan of true love, then this story is just for you. It’s the love story of Barbara and Kenneth Woehl of Thomson, Ill. It all started more than 50 summers ago. 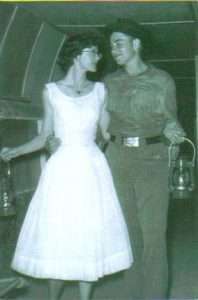 Way ‘back in 1956, Barbara, a beautiful and horse-crazy teenage girl from Wilmington, N.C., decided to ride a bus for two days to go up to northern Nebraska to work at a very special horse ranch for the summer. She was hired to do clerical work and odd jobs in exchange for free riding lessons.

The White Horse Ranch was famous for its gorgeous white horses and spectacular 100-acre property. Cowboy icons Roy Rogers and Gene Autry visited there. It was featured in Life magazine. Warner Brothers made two short films about it.  It no longer operates, but the buildings are on the National Registry of Historical Places and there’s a museum in the nearby town of Naper, Neb.

Barbara said it was a “wonderful, wonderful” summer – and one reason was because on a moonlight ride on a warm June night, she met a local boy with the nickname of “Babe.” He lived just over the state line, near Burke, S.D. He would come to the ranch to visit his older brother, who was working there.

Barbara always called her horse “Babe,” and would wonder why her co-workers would laugh when she did so. On a dare, when Babe came for the next visit, the young man struck up a conversation with her.

Barbara and Babe hit it off. They went to Saturday night dances, on hayrack rides, and to the Sunday afternoon public horse shows that the ranch put on. He would walk her back to the gate of the bunkhouse where she stayed, and they’d share a goodnight kiss.

At summer’s end, she went back to North Carolina for her senior year in high school. They wrote to each other, and the following summer, Barbara came back with her mother and sister.

She and Babe were secretly engaged. But he had second thoughts, and sent a letter breaking off the engagement.

After reading that letter and making one phone call, Barbara wrote in her diary: “My life is over.”

She went on to become a veterinarian, rodeo’ed and fox-hunted, married in 1970, and had a son. She was divorced in 1987. She worked at a ski resort, developed acting skills, and was a stand-in for the actress Sissy Spacek opposite Mel Gibson in a production of “Love Letters.”

She wound up in northern Virginia, acting and helping out a fellow veterinarian.

Meanwhile, Babe had married someone else a few years later, got a job working in an Illinois factory, and had three children before divorcing after 10 years.

He tried to get a hold of Barbara, calling the Wilmington chamber of commerce, but the family had moved and no one remembered them.

He did remarry, but then she died of a heart attack. He again thought about Barbara, but had no idea how to find her.

He started attending the every-other-year reunions at the White Horse Ranch in 1994, always wondering if he’d happen to see her again.

In 2006, while having breakfast at the Naper Café, he learned from the reunion organizer that Barbara was coming. “I almost fell out of my chair,” he said. She had found out via an Internet search that the reunions were going on, and made plans to attend.

When she learned that he would be there, too, “I couldn’t believe it, but I also made sure that I was looking my best for the barbecue that night.”

He wasn’t sure how she’d feel, seeing him again. After all, he was the one who broke up with her. But he said, “I think that, deep in my heart, I was still in love with her.”

She didn’t recognize him at first. But after they were introduced, she sat down beside him . . . and he leaned over and kissed her. She said, “I was thrilled to death.” 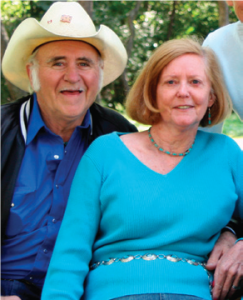 Photo by Linda Gordon for

For the full story, see www.harpsonline.org/clientuploads/WhiteHorse.pdf

This time, they made it stick. They were married one year later, at the White Horse Ranch, under a cedar arch wrapped in ivy and wisteria overlooking the Niobrara River. The bride arrived by horse-drawn carriage, clad in a white western hat and white boots. The reception was a barbecue and dance. It was 51 years after they met.

They’re living in northwestern Illinois, happily ever after.

“It’s such a miracle that he’s back in my life after 50 years,” Barbara said. “I think we’re the luckiest people in the world.”

Her husband added, “We kind of always thought that God had something to do with our getting back together.”

There’s no doubt about that. Love sometimes takes its time, even half a century . . . but, as the Good Book says, love never fails. †