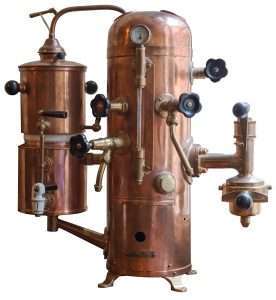 Be not hasty in thy spirit to be angry;
for anger resteth in the bosom of fools.

We were a growing family with three daughters. We needed more space. So we had just bought a bigger house. It was a beautiful, big, wide, ranch-style home. We got a good deal on it, since we bought it in the winter.

On moving day, I got a really good lesson about anger management, and controlling your boiling point. I don’t always succeed at that. But when I think back on this episode, it makes me laugh at myself, and resolve never to stay angry for very long, no matter what.

See, we moved in on a cold, snowy day. It was, inconveniently, the same day my Beloved was to leave for a long-planned guys’ golf outing.

I was exhausted, after weeks of packing and cleaning at the old house. But there was a lot of work left to be done.

So here we were, in the dead of winter, with moving vans crowding the driveway, snaking trails of moving men bringing in furniture, and legions of boxes being stacked to the ceiling in the entryway.

But my Beloved was going to get to fly to a sunny southwestern resort and play golf with his little mutt friends and drink beer. Meanwhile, I would stay here in the frozen tundra, clean everything, carry allllll these boxes to their assigned rooms, and put everything away.

WHAT’S WRONG WITH THIS PICTURE?!?

That’s OK. I loved the house. I was happy. It would be fun to put all our stuff away, just so. At least, that’s what I told myself. But there was, shall we say, a molecule of resentment bubbling up?!?

The movers left. My Beloved found his golf clubs in the clutter, surveyed the towers of boxes, said cheerfully, “You’re all set!” and blew town, Brown. Sigh.

“Put In Storage and Forget For Another Ten Years.”

But then . . . organ music . . . it started getting hotter and hotter and HOTTER in the house. I was sweating, and it wasn’t because I was carrying heavy boxes around.

I panicked. This was an older house. There was a big, old boiler downstairs, instead of a furnace. It took up practically a whole room down there.

I could sing the old jazz song, “We got ssssssssteam heat!” but I didn’t know anything about that kind of a heating system. As usual, my imagination started running away with me.

It was so hot upstairs, that boiler was probably ON FIRE down there!

The thermostat upstairs said the temperature was normal. But it was blazing hot in this house! Obviously, the boiler was going haywire, or the thermostat was dangerously malfunctioning! AA-OO-GAH! Fire hazard!

Why didn’t the inspection reveal this serious problem?!?

And it was allllll my husband’s fault . . . because he wasn’t here to deal with it! So I had to!

I had glanced at the boiler during the tours of the house, but, unliberated female that I am, mentally shifted boiler duties to my Beloved’s side of the home maintenance ledger.

The boiler wasn’t the only thing that was boiling. I was boiling MAD!!!

He left me to deal with this myself, in harm’s way! It must be down there bubbling like a cauldron! Out of control! Jumping off its footings! Laughing, evil red devils sticking out from all sides! Flames licking out toward combustibles such as myself and the children! The whole shebang about to go . . . SHEBANG!

What should I do, carry all the boxes back outside, into the snow?!?

I was so stressed out, so hot . . . and soooooo mad! This was my HUSBAND’S fault! I was soooooo angry! He had left me here to DIE in a fiery EXPLOSION! And when the firefighters found the whole house a big mess, with all these boxes, it would get in the PAPER that I was a terrible housekeeper to boot!!!

I wiped off the sweat moustache, and started planning all the angry things to say when I finally called him. I would have a firefighter’s blanket over my shoulders, the children sobbing and huddled at my feet, with the news trucks reporting on the 5-alarm fire . . .

. . . and he would be in the warm sun on the first tee of the resort golf course, under palm trees on his jaunty golf trip, in front of his equally hedonistic little friends. I would ream him out for leaving me to deal with this inscrutable mechanical monster all by myself on my very first day in the house! Sniff! Sniff! WAH!

That is, I angrily planned what all to yell at him if I didn’t get blown to smithereens in the meantime by this mysterious enemy throbbing in the basement.

But . . . by chance, while lugging the last box into place, I noticed a whole ‘nother thermostat. It was on a short wall next to a closet at the back at the house. I didn’t even know we HAD a second thermostat.

There must be TWO thermostats in this new-but-old house. It was ranch style, and really wide. Must have something to do with that.

My elbow must have accidentally re-set this second thermostat somehow, while I brushed by it, rounding the corner with one of those big boxes.

That solved the mystery of why the boiler was heating up to 99 degrees. My elbow had accidentally set it that way. The heat wave was my fault. My husband had nothing to do with it. Maybe, just maybe, I shouldn’t have zoned out of the home maintenance instructions when we bought this house. Then this crisis would never have happened.

I immediately re-set the thermostat to “72.” The house cooled down, and so did I.

The house didn’t blow up, and neither did I.

I refrained from calling him and disturbing his golf trip. We lived there for 10 more years and never had any problems with that mysterious boiler. We laughed about it many times. It’s another reason our kids call me “SPED Mom” as in “Special Ed.”

It was a good lesson about anger. When you reach the emotional boiling point, before you start a fight, stop and find out if maybe it’s YOUR fault things got so heated. Then hit “re-set.” Cool down. You’ll be glad you did.

It’s best to know before you blow. †