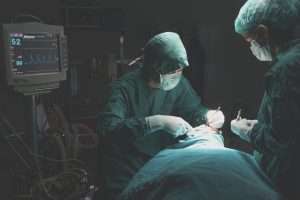 And was transfigured before them:
and his face did shine as the sun,
and his raiment was white as the light.

A boy was walking along the Interstate because he had heard that his friend had been in a car accident down the road. Somehow, a speeding pickup truck slammed into him. It knocked him into the air. He landed on his head with a giant gash in his abdomen. He was rushed to the hospital. It didn’t look good.

My friend the Operating Room nurse was assisting the surgeon in getting ready to crack open the boy’s chest. Everybody was rushing around to try to save the boy’s life.

All of a sudden, out of the corner of her eye, the nurse saw a white flash pass by the O.R. doors.

A figure in blinding white was framed by the narrow double window, for just an instant.

Like a flash bulb going off, she thought. But she could make out the form of a person.

She thought she had just seen an angel. But she’s not “that kind of a girl” – not given to wacky, offbeat hallucinations or strange mysteries. She was a scientist, by golly!

Simultaneously, the doctor sucked in his breath.

The nurse didn’t know him very well, so she was too timid to ask him why he did that. She assumed he had just noticed another area of the boy’s chest cavity that was in bad shape and needed attention.

But then he asked her, urgently:

She gulped. “You mean, the white flash?”

“The guy in the white, shiny, long robe.”

He paused. Then he pointed to the boy’s upper main artery. It was completely crushed. That meant the injuries were so severe that the boy would not survive another minute.

Though they kept working at top speed, the boy’s life slipped away. And then it was gone.

She was sad, but not devastated. And she didn’t think the doctor was, either. Instead, she was amazed and encouraged and uplifted and comforted, by the white flash she saw. She understood what it meant. Jesus had been there for that boy. The boy was with Him now. He wanted them to know.

She let out a long, slow sigh, and she smiled.

You hear those stories a lot. God bless our wonderful, wonderful medical heroes in the E.R. and the O.R. They see so much tragedy and pain. They deserve the profound blessing of seeing that flash in white. That instant of supreme encouragement can take you a long way in the stressful field of medicine.

It got me to thinking:

We are ALL in an I.C.U. or an E.R. or an O.R. of one kind or another. Plain old life puts us there. I’m speaking of the spiritual life that we lead, not the physical one, of course.

Things happen to us, spiritually. We are cut and we bleed and develop diseases and bad things have to be pumped away from us and good things put back in. Sometimes we fall into a spiritual coma. Sometimes we are in so much pain, we can’t be comforted. Other times, we go numb.

But all along the way, we are in the intensive care of the Savior – the One Who let Himself be seen as a flash of white that tragic night.

Our lives are in His hands. The Great Physician, the Ultimate Healer, the Savior. You can see him as a babe in a manger, or a miracle worker, or a teacher of thousands, or a tortured man unjustly hanging on a Cross.

But some see him as a flash of white. And that might come the closest of all.  †