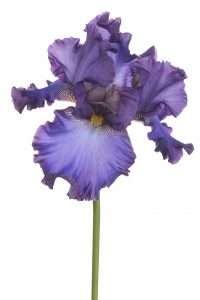 Is there iniquity in my tongue?
Cannot my taste discern perverse things?

In the late afternoon of a very busy day, I realized that it was the birthday of a dear friend and neighbor. I quickly made her a big bouquet of my grandmother’s heirloom blue iris and pink peonies. Ah! Their incomparable smells! Their elegant beauty! Their elaborate shapes, upheld on long, sturdy green stalks!

She loved the bouquet. But I didn’t have time to clean up around the sink. I had to rush off to the next errand, and the next.

My Beloved had snuck in an outing with the dawgs on the green, green meadows chasing the white, white ball with the funny-looking sticks. So Maddy and I were on our own for dinner. Voila! It’s a Burger King night!

Well, by this time it was 7 p.m. I was famished, my stomach rumbling in the carry-out lane. Felt like getting a quadruple Whopper, but reality intervened. I ordered a nice chicken Caesar salad, salivating at the prospect.

We got home and set out our meal. But as I took the plastic cover off my salad, my expectant smile turned into a disappointed grimace:

THIS LETTUCE IS FROZEN!

YOU CAN SEE CRYSTALS ALL OVER IT!!!

I picked through it over the kitchen sink. The chicken chunks were good, and still warm, so I ate them. But the other veggies, including grape tomatoes, were frozen and fossilized, too.

How could any decent human being have served me that salad? Hmmph!

I called. The manager lamely said that he had been mad at his staff all day for stuff like that. Sorry! But hey, if I drove back over, they would give me a “free” one. But by then, I had lost my appetite. Double sigh.

Dejected, I dumped the rest of the salad into the wastebasket and went outside to garden with gusto ‘til it was too dark to see.

Thunder and lightning were all about. I came back inside just as the downpour began, and was washing my hands at the kitchen sink . . .

. . . when I spied a great-looking green bean. It was long and richly green, plump and succulent. It had a gourmet French-cut on both ends. Even if I hadn’t been so hungry, it would’ve been great-looking.

Ooooooh! It must have fallen out of the Burger King salad! It must not have gotten frozen, or if it did, it has defrosted and looks crisp and delicious!

I stuffed the whole thing in my mouth, and chomped and chewed and chomped. Many seconds passed. But it never broke down the way a good green bean would. A tasteless, stringy and unswallowable lump remained in my mouth.

That darned Burger King! They can’t even get a green BEAN right!

Disgusted, I spit out the wad into the wastebasket. Five minutes later, though . . .

What the heck? Had Burger King not only frozen my lettuce, but poisoned my great-looking green bean, too???

I rushed back to the sink for a glass of water and spied quite a few OTHER great-looking green beans. And some peony leaves. And some iris blades.

AAAIIIEEE!!! That was no green bean! I had just eaten a big piece of iris stalk. It’s the most poisonous garden plant of all!

My mouth, tongue and throat were really burning. The pain was tolerable, and didn’t seem to be getting any worse. But what about the toxic chemical I had swallowed? Better find out if there’s an antidote!

I shared my concern with Maddy. She asked in her typical tweener way: “How much longer do you have to live? Can you still drive Ally and me to the mall to get those dinosaur Pillow Pals?!?”

Aarrgghh! Where’s the sympathy and concern, in my time of need?

I tried to google the facts and get a remedy. But, naturally, because of Nature’s temper tantrum outside with the thunderstorm, we didn’t have any Internet access.

It was Friday night, my doctor was off duty, and I just didn’t think I could bring myself to call a hospital emergency room to confess what I had eaten. They would have my phone number on the caller ID and send the truck with the men in white coats. Plus, it wasn’t getting any worse, and there were no other symptoms, except for my burning mouth and throat.

So I twisted in the wind for about an hour. Was I going to die? If so, oh, no! I had NOTHING suitable in my closet to wear in my casket!!! Maybe I should just get cremated and it wouldn’t matter. . . .

Finally, our Internet came back on and I could google. Turns out the iris is, indeed, poisonous and toxic. It could kill a small animal if enough is ingested. But for my size (sniff — the reason I got the salad and not the quadruple Whopper in the first place), it would only be an inconvenience, and the burning would last only a couple of hours.

True, and true. All better now. Hardy har har. Another Doofus Moment for my ever-thickening book of them.

But I got to thinking:

It tempts you when you’re needy – in my case, hungry and in a hurry — but also when you’re lonely or bored or hurt or disappointed. When you’re too frazzled to think through whether you should, or shouldn’t, imbibe in something, that’s when sin tries to get you to go for it.

When you’re vulnerable, something great-looking comes along, and you rush to consume it, without really checking where it came from, what it is, and what it is likely to do to you.

Then, by the time you realize there are bad consequences, it’s too late, and you’re stuck with what you’ve done.

So how to keep from being vulnerable? Not so easy. But the simple solution is to not LET yourself GET vulnerable.

And I can hear my dad’s voice on his Greatest Hits of Parenting broken record: “Think before you act.”

Someday, I’ll learn to do that, and won’t have such a bad taste in my mouth over my Doofus-osity.

Best thing to do, too, is to keep ordering from the take-out window of God in heaven. He’s the Master Chef. He’ll give you the food you need for every aspect of your life. It’ll always be safe, good and in just the right portions.

He’ll never serve you icky, frozen, lime-green lettuce . . . and His green beans are always great-looking, tasty AND won’t make your mouth feel like the fiery flames of hell! †