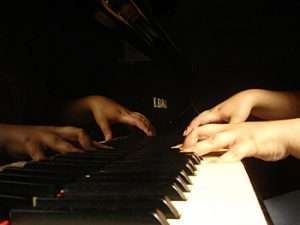 Wait on the Lord:
be of good courage,
and He shall strengthen thine heart:
wait, I say, on the Lord.

I am still laughing over what a church friend of our family’s said. She found out that her daughter’s lifelong dream of owning an extra-special piano could come true. She is a strong Christian, ordinarily very meek, modest and mild-mannered. I’d bet you money she has never cursed in her life.

But when she heard that a certain special piano was available at auction, she shouted: “HOT DAMN!”

See, this family was of very modest means. They scrimped and saved to give their daughter, Laurie, piano lessons. They knew how crucial good musical instruction is for kids.

Lo and behold, Laurie developed into a great pianist! She could really play. It was a bit of a bummer that all her family could afford was a beat-up old upright, though. It’s like mukluks on a ballerina, or a winning jockey on a warthog.

As the years rolled along allegro, she started declaring that someday, she was going to own a really special piano. Maybe even a grand piano!

Her parents gave her a reality check. Those things are so big, they’d have to knock a hole in the wall to get it inside. It would be the only piece of furniture on the main level of their modest house. They’d have to eat dinner on it. They couldn’t possibly afford it, anyway. Be realistic, they told their daughter. It’s not going to happen.

Yes, it is, she would reply, forcefully. Someday, I’m going to own a really, really great piano. I prayed for it. I will get it. You’ll see.

The years flew by. She moved out, finished school, started working, got married and had a family. I gather she played the piano at her church and made sure her own kids learned to play.

But again, her dream of an elegant, special piano had to remain on the back-burner for decades. She put the needs of everybody else above her own. She had a beater piano in her home, and some of the keys didn’t work too well.

But every once in a while, she would remind her family that one day, her dream would come true.

Then, one morning, her mother watched a local TV news report about the local performing arts center getting a huge facelift. They were going to auction off all the old furnishings. Among them: a historic baby grand piano!

City officials speculated that it had been played by the likes of Chuck Berry, the Rolling Stones, Neil Diamond and Elton John. It was the most storied and special piano in the entire city.

She immediately called her. Laurie had moved to a faraway state. But she checked it out online. Yes, it was a beautiful, classic instrument, one worth upwards of $25,000 brand new. It wasn’t just a baby grand piano – it was a Baldwin! Just about the best kind. She would go online for the auction and see what might happen. Nothing ventured, nothing gained.

At 8 a.m., she entered the opening bid. She started off really, really low to give herself room to increase her bid. The same fingers that longed to glide over those ebonies and ivories hovered over her computer keyboard all morning long, in case a bidding war developed.

But, incredibly, nobody else bid.

There are 88 keys on a piano. Laurie probably jumped 88 feet high.

Yes, there were additional expenses for fixing up the dinks in the gorgeous woodwork, tuning it, and of course moving it hundreds of miles to her new location. But before Christmas Day, Laurie’s musical dream had come true. The truly grand and glorious piano was in place in her home, just as she had imagined it would be one day.

Its action was perfect, too. As her fingers moved over the keys, nowhere did they stick. Nowhere did she have to strike a key twice. Ahhhh! This piano’s “feel” was a dream come true. Like a good horse with a good rider, or a good golfer with a trusty putter, it’s a wonderful and rare match when you have a gifted pianist with a beautifully-made piano. Heavenly!

But she struck an even more beautiful chord with her attitude about the whole thing. She accepted God’s perfect timing instead of forcing her own. It was a rare and mature sacrifice. In the end, she was rewarded, bigtime.

“You know, Mom,” she said, “I don’t think I would feel as great about this if I hadn’t had to wait all these years. It’s been worth it.”

Now she has cut a CD of Christmas songs played lovingly on her piano, sharing its quality, and her gift, with the world.

I imagine there’s a choir of angels gathered around another very special piano in the heavens above. I imagine it’s a white one, grander than grand.
When they heard Laurie’s modest statement of deep and abiding faith, that some things really are worth waiting for, and God will come through for you, I bet they all shouted: