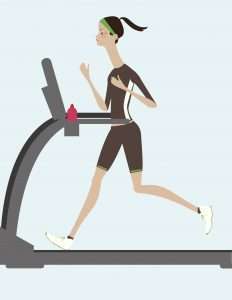 He openeth also their ear to discipline,
and commandeth that they return from iniquity.

Do, too, exercise, I told the skeptics at my health screening. I am highly-attuned to the habits of discipline. Observe:

They weren’t buying it. They kept frowning. Numbers don’t lie. The couch potato was mashed.

I was fat. Fat! Lazy! Butterfinger crumbs on my chest! Candy wrappers on the floor of the car! Pants in the closet that hadn’t zipped up for years.

Maybe I could buy my own treadmill, for privacy. The store clerk demonstrated one with a cockpit like an F-22 Raptor, with thrust vectoring and supercruise. “Wow! That’s fancy. How much is it?”

“A little under two,” he said.

“Two THOUSAND,” he sneered, retreating to his iPod.

Maybe a used treadmill, then. But my friend’s is only 14 inches wide. It’s tough to stay balanced. It must have belonged to a peg-legged pirate. Yo ho ho, and a bottle of . . . Dasani? Can this broad walk that narrow?

So it was off to the fitness center, in my Brunhilda the East German Border Guard workout clothes. The other women were in flirty sports bras and volleyball shorts. Oops. Didn’t get the memo. Men’s faces swung hopefully toward me as a “newbie” walked in. Then the faces sighed, and swung away.

The guru gave an orientation, unaware of my E.I. – Electronic Impairment. “See this mmshwkghxwo? You just press the qjksiv and it’ll JVHSYTG for you. Got it?”

“Wait! Waaaaiiiitttt!!!!” But he had already retreated to his iPod.

I was on my own. It was time to shake it, Baybee. Shake it!

What was really shakin’ was the floor underneath the treadmill. The speed was set at 4 mph. How to slow it down? No clue. Gripping the bars for dear life, I staggered forward desperately, like someone at the very end of the Boston Marathon. If I fell off, there was no one there to catch me.

What’s that annoying squeak? Dang thing’s going to break? That would be good. At least it’d stop. But nooo. My heels were bumping up against the back edge because I could barely keep up.

Not only that, but I kept accidentally clunking the backs of my hands on the metal parts. This was because I kept making exaggerated arm movements, hoping to swing away unsightly upper-arm flab. Now I was going to have bruised hands. THAT’S unsightly!

Not only THAT, but all I had for audio was an old yellow Walkman, the size of a small suitcase. It teetered on the “dashboard.” Inevitably, the not-so-good vibrations of my lumbering efforts caused it to crash down onto the walkway, pass between my feet, yank out my earphones painfully like twin corks, and clatter loudly onto the floor behind.

It just looks soooo much cooler on those TV ads, with the happy, peppy, positive Barbie Dolls working out. Meanwhile:

My face turned the color of E.T.’s as my circulation stirred from its fossilized state.

My legs took on a marked Van-Choc-Straw appearance: pudgy white thighs, hot-pink knees, and brown, bony shins, the only body part I’m willing to expose for tanning at the pool.

Between the purple hands, pink face, and Van-Choc-Straw legs, I couldn’t look in the mirror at the fitness place for one more second.

Let’s try the wall TV. But with my E.I., I didn’t know how to change the channels. So I was stuck with what the person before had “on” — a lesbian kiss scene here, and over there, a gripping documentary about a woman who sought Third World breast augmentation, except one of “them” exploded.

Defeated on all fronts, I trained my eyes straight ahead – on the treadmill controls.

And what do you know: they’re fun!

Heyyy! Here’s how to check my heart rate!

Hunhhh! Here’s how to keep track of calories burned!

“Incline.” Let’s simulate the steep steps of a Mayan pyramid!

Despite the rocky, embarrassing start, playing with the treadmill controls got me hooked on exercise. Now I really love it, regularly working out for an hour and burning as many as 600 calories. Amazingly, 4 mph now seems a little SLOW! Once in a while, I get up the nerve to jog a little bit. Makes me feel like an athlete!

I’m 20 pounds lighter. My purple bruises have gone away. OK, so I’m not a hot babe centerfold yet. But hey! Lukewarm ain’t bad.

I even wore a slightly skimpier outfit — Gertrude the WEST German Border Guard — the other day. And I got an iPod for Christmas. I retreat to it regularly. So there!

I may still look weird bouncing along on that treadmill. But less me equals more fun. †