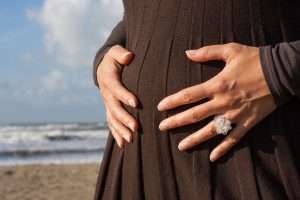 (T)o give unto them beauty for ashes, the oil of joy for mourning,
the garment of praise for the spirit of heaviness;
that they might be called trees of righteousness,
the planting of the Lord, that he might be glorified.

She was 23, and on birth control pills. But she came up pregnant, and her boyfriend bolted. “I don’t want ‘it.’ Get rid of ‘it,’” he said, or something to that effect.

She was horribly deflated, terribly confused, and time was running out. Her friends were no help. She never really had a mother she could turn to. She had a little money, but boy, not much.

She made the appointment to have an abortion.

But she let it slip, at church, to an older friend who’d been kind to her. The abortion was set for just a few days away. Her mind was made up.

Instead of condemning her or withdrawing icily, though, the older friend asked her to think about it a while longer. Then she raced home and called every prayer warrior she knew, asking them to go to battle for the life of that unborn child.

One of them, my friend, prayed that God would bring babies into the young woman’s path. Try resisting the awesome power of God’s favorite thing, new life. Those chubby cheeks! That soft skin! Those baby-elephant hairdos!

Lo and behold, a coworker popped in with her new baby the very next day. The young woman held the baby . . . and the rest is history.

She canceled the abortion. Then she called her mentor friend and admitted that she needed help – lots of help.

She came over. They cried and talked through the night. Next morning, they went to church together. Gradually, she shifted gears. OK. I’m scared and alone. But I can do this.

Suddenly, friends and comfort surrounded her like a living wall. People all over the country were praying for her. They sent Bible verses with God’s promises of peace and happy endings. They encouraged her that, with Jesus in her heart, she will never be alone, and her needs will never go unmet.

Two ladies, complete strangers, sent her a card. She opened it in the home of her mentor. She screamed, “Come quick!” Her mentor thought she was miscarrying.

Inside the card were five $20 bills. She had JUST been worrying and praying about her finances when she opened it.

Here’s the part I love: she put one $20 in the collection plate that next morning, and spent the rest on a ring with a beautiful, dark pink stone.

Now, a lot of people would have saved that $100, or spent it on practicalities. But she needed that ring as a symbol of her relationship with her true Husband, the One Who gave her the precious life of her baby, the One Who will be with her every step of the way.

She calls it her “Mommy Ring.”

Today, she’s at peace. She goes to a top-notch obstetrician because her uterus is misshapen, so she is a “high-risk mother.” As close as her baby came to being aborted, the terminology is humorous, but compelling.

She just found out: it’s a boy.

She moved into a friend’s house, and has two bedrooms, one for her and the other for the nursery she is free to decorate however she desires.

Her friend from church will be with her in the delivery room.

And the father of the child? He’s still around. She’s letting him select the baby’s first name. Two other men who have expressed caring for her, too. And at Christmastime, here came some more anonymous gifts.

She’s got a Mommy ring. It’s a token and pledge of the constant faith and abiding love of the One who loves her . . . for better or for worse, for richer or for poorer, in sickness and in health . . . for as long as she and her son shall live . . . and forever and ever after that. †