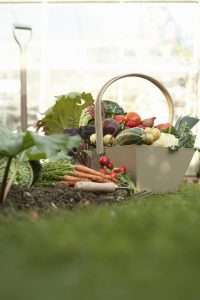 I live in a farm state. ‘Course, you’d never know it. I don’t know a tractor from a combine. I’m what they called “Agriculturally Impaired.”

Oh, I’m motivated, all right. I love veggies and want that incomparable, home-grown quality. Every spring, I resolve to start one. But I always get distracted and peter out. Like, on Day Two.

It’s on account of my many failures, you see. Once, I planted radishes. The leaves grew elephantine. I was thinking State Fair. Woo hoo! Then I pulled them up. Despite the luxurious leaf growth, each radish was the size of a freckle. I don’t know why.

I planted leeks. They sprang some, I guess. You know: leaks. Whatever. They never came up. I don’t know why.

I planted carrots, but didn’t take time to cultivate the compacted soil under the seeds. It was as hard as a rock under the first two inches. Therefore, instead of plunging downward, the carrots spread out broadly, several inches wide and one inch tall. Carrot bricks.

Then, like a prince on a white charger, or maybe it was a green tiller, my brother-in-law Ernie propositioned me.

He’s a longtime gardener: he grew up in rural Nebraska as one of about 47 children in his family – of course I’m exaggerating – but every kid worked in the garden out of necessity. So he asked for some garden space in a weedy, unused paddock behind our barn. If we’d supply the space and the water, he’d do the rest, and share the harvest.

HALLELUJAH! So we have a farm now, and Ernie’s our tenant farm. We call it “The North One-Fortieth,” since it’s not much more than 1/40th of an acre. It’s on the west, not the north, too, but we like to be cute.

First, he tilled, nice and deep. He put in all kinds of mysterious “soil amendments.”  Then, he built a critter fence: Stalag Ernie.

Then he planted cucumbers, beans, lettuce, radishes, broccoli, potatoes, tomatoes and corn. We also have a pumpkin patch, and zucchini, squash and gourds.

It’s primeau. The tomato cages would withstand a nuclear blast. The watering system is like something at EPCOT.

My husband, a technical guy, added a rain gauge, harrow, and steel rebar for the fence.

We’re having fun. Ernie pops radishes into his mouth with dirt still on them, but he doesn’t even care, they taste so good.

I wilt with pleasure over Wilted Lettuce Salad, minutes after harvest, even leaving the ladybugs in because they’re OK on the Atkins Diet.

I love how the bunnies can’t get in through that great fence. I love what good exercise hoeing is. There’s nothing like going out there in the early morning, when the sun is just warming up the earth, and I swear you can “smell” the plants growing. It’s so wonderful.

Our neighbors are getting in to the act, too. Last year, Steve, up the street, put in two tomato plants, stepping on the stems on the first day to purposely break them and get good root growth. Consequently, though, he slowed his plants down, so ours dwarfed his. We were already picking tomatoes, while his had barely blossomed.

Well, one night, he was coming over with his wife and some friends to show off his two paltry tomato plants. So I played a trick on him: I snuck out there first with some pretty good-sized store-bought tomatoes, and wired them to Steve’s plants, as if they’d miraculously appeared overnight.

You should have seen the look on his face, before he realized he’d been had. He crept up reverently like he was seeing the baby in the manger! It was better than an ad for Miracle Grow!

We all laughed ‘til we cried.

That’s what we’re growing out there, anyway: miracles. Of life. Of growth. Sowing and reaping, nourishing and sharing. Having fun and enjoying nature. It’s how the Gardener plotted it all along.

And nobody, not even those bunnies, can do a thing to stop us.