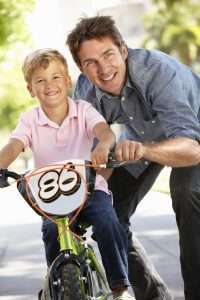 To him that overcometh
will I grant to sit with me in my throne,
even as I also overcame,
and am set down with my Father
in his throne.

He comes to our house and cleans our windows. Afterwards, the world looks much brighter and clearer. He’s that good.

This last time, he said two things that seemed contradictory. First, he said that he couldn’t wait to get home to play with his baby daughter. Second, he said that he has his twin 7-year-old sons already in training for football. Each day, they strap on ankle weights and jump on the back-yard trampoline, knees to stomach, 1,000 times. Then he has them run around the house 40 times. When he gets home, they do some timed 40-yard dashes, too.

Whoa, I responded. Why so tough on those boys?

His reply was matter-of-fact. “I never had parents,” he said. “I could have done something if I would have had a father backing me.

“I guess I’m setting it up for my kids to not have to go through what I did.”

You could see the heartbreak . . . but also the pride. He had been  failed as a child, but he got over it. Now he’s doing his fatherhood job the right way, all the way.

His face softened. The story spilled out:

He was in second grade when his mom and dad placed him and his brother in a home for boys. Married and in their 20s, they just couldn’t take care of them. Or didn’t want to.

Although he excelled in sports and school, and appreciated his houseparents and teachers, a hole in his heart was ripped open by that abandonment. It was a living hell.

The OTHER boys went home for a month in the summer. Why not him?

Many of THEIR dads showed up at their sports events. Why not his?

He started smoking, which ruined his athletic career. Then he started running away, joining gangs, carrying Chinese nightsticks, drinking, and stealing for a living.

He was a criminal before he was 18. “If you don’t catch it when they’re young,” he muses now, nearly 20 years later, “it can get out of hand immediately, especially the way we live now in the world.

Chilling, isn’t it? So is what happened next:

He burglarized hundreds of houses. Inevitably, he got caught. The judge sent him to The Big House – the state penitentiary. It was horrible.

He got out, and says he hasn’t stolen a thing since. But he did get a third DWI, and faced a return to prison and the permanent loss of his driver’s license.

But during sentencing, he broke down in front of the judge, and she had mercy. She ordered him into intensified probation, with a six-month life skills class at his own expense. In that class, he finally found himself.

He quit hanging out with criminals.

He and his brother confronted their parents, and learned that they had been abandoned, too. They just didn’t know any better than to repeat the cycle.

He realized he had the power to break it. He wanted to. He had to.

Now, he’s got his own business, a nice house, a loving wife, and “tremendous” kids. Nurturing them is healing him, he says. He goes to church every Sunday, and credits God for his turnaround.

“I think you have to take your life and put it in faith,” he said. “Trust yourself to somebody that’s ‘way higher than you, and you’re going to go ‘way farther.”

And be rewarded. Just like Jesus trusted our Heavenly Father. He didn’t deserve the hell he got, either. But he overcame the worst imaginable adversity to break the cycle of sin, once for all time.

So three cheers today, and every day, to all those fathers out there who are overcomers. Hooray for those who do what you know you should, no matter what.

Applause and gratitude for the men who are doing everything it takes to keep our children’s windows on the world clean and clear and bright. †