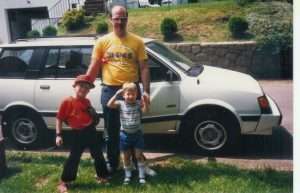 Wherefore they are no more twain, but one flesh.
What therefore God hath joined together,
let not man put asunder.

It’s time to get out the Easter baskets. We have six. Each one’s different, and each one’s lovely. This year, as you set out yours, I hope you’ll stop and admire the basketweaving for a moment. Notice how the weaving joins together different pieces into one. That makes each basket strong and yet light. Each basket is beautiful and yet useful. Better because the strands are connected. Better together.

Besides everything else He is to us, our Lord is a Master Weaver. Only He doesn’t weave with baskets, straw or yarn. He weaves with people!

And here’s a fun story that proves it:

A friend of mine had seven children. One of them, Stan, married a wonderful young woman named Lyn. They had a son, but he developed a birth complication and had to be life-jetted to medical care. It was an ordeal. Fortunately, he turned out fine . . .

. . . but not long thereafter, Lyn found out she was expecting another baby AND that she had breast cancer.

She went through treatment at the same Bethesda, Md., hospital where they care for the Presidents. Lyn’s treatment choices courageously put the baby’s health ahead of hers. She had a second son, born in perfect health. Three years later, unable to defeat the cancer, she died.

The boys were 3 and 5. All that time, Stan had been trying to care for his wife, be both mother and father to their sons, and work 48 hours a week. He was tired. Dead tired! He told his mother he would never get married again.

A year later, he and the boys had moved closer to his parents. The boys were saying things like, “Daddy, we want a Mom like all of the other kids.” The younger one, Matthew, stood at the door at the day care as everyone was arriving, and looked at the mothers. He asked one little boy wistfully, “Is that your Mommy? Does she love you? Does she cook good?”

The grandmother’s heart was already broken, but now it was shattered. She began to pray, and told everyone she knew to pray, too. Bring Stan a wife! Bring those boys a mother!

A while later, a friend introduced Stan to a young lady named Joy in a neighboring state. They hit it off. One day, one of Stan’s sisters called. The grandmother told her he was out of town, visiting someone named Joy. The sister asked her last name . . . and burst out laughing. Coincidentally, the sister and Joy had been friends and had ridden bicycles together all over Europe, years before. They lived in the same dormitory while both completed their educations.

The grandmother just knew this was the answer to prayer.

When Joy and Stan became engaged, the bride-to-be was going through her possessions, getting ready for her new life with Stan and the boys. She found a picture of a little boy that she had taken at a wedding. It happened to have been the wedding of one of Stan’s sisters. She didn’t know Stan then. She had attended with someone else, who knew the family well.

She had no idea who the little boy was. She had just taken the photo because she thought he was so cute.

That same little boy was now going to be her stepson — Andrew!

Andrew – the little boy who asked his preschool chums what it was like to have a real, live mother.

When a “coincidence” like that happens, you laugh. You cry. You bow your head to the Weaver. You express thanks and awe at the way He is using you for others’ good. He knows how things would work out all the time, even if you don’t. He’s the One Who always knows what’s going to happen, who’s going to fall in love with whom, and why.

Well, thus encouraged that it was God’s will for her to be woven into this family, she married Stan. She loved those boys. She “cooked good” for them, too.

Today, they’re both grown and married. One just presented the first great-grandson. Stan and Joy have a teenage daughter, too. All of them love the Lord, the One Who wove them all together in the bonds of love. 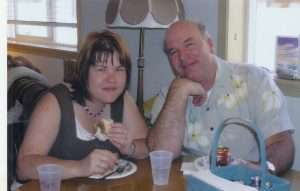 Joy and Stan . . . woven together and living happily ever after.

And the new great-grandmother? She says there is nothing she is as glad about in her whole life as having made sure that all of her children believed in God, trusted Him for everything, and made prayer a part of everyday life.

She said, “There’s no safer place to put our loved ones than in the hand of God.” †