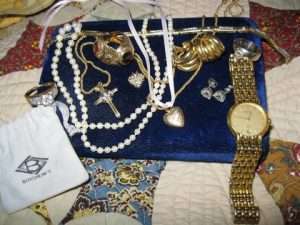 And they that be wise
shall shine as the brightness of the firmament;
and they that turn many to righteousness
as the stars for ever and ever

Vicki had stayed at Penny’s house and babysat her little poodles. She was a long-time member of Penny’s church. They frequently sat side by side in Sunday School class. They were both Nice Christian Ladies.

Single, unemployed and barely making ends meet, Vicki needed income. Meanwhile, Penny needed someone to watch her house and her dogs from time to time, while out of town. She hired Vicki. It seemed like the ideal win-win.

Vicki has a zany sense of humor and comes off as a bit scatterbrained, with a “whatever” attitude. Penny, who is awesome but does lean toward the perfectionistic side, wishes she could be more like her in that regard.

So when Penny left town to go meet a new baby granddaughter, she left Vicki in charge of her house and dogs. As a precaution, Penny hid most of her good jewelry away from the enticing jewelry box, tucked away inconspiculously in bags and boxes in her closet.

Imagine her surprise on returning: those bags and boxes were gone!

Vicki affirmed that she didn’t know anything about the missing pieces. Helpfully, she came over for several days to help Penny look for them.

Vicki made quite a commotion: “They HAVE to be here.”  She tore up Penny’s bedroom in a spectacular, frantic search. Penny’s son, the ever-calm, analytical engineer, told her Vickie was crazy: “She is sweating like a basketball player in overtime and running around like a madwoman. What the heck is she so upset about? It isn’t HER jewelry that’s missing.’”

Penny was crushed. To a divorced woman, valuable and heirloom jewelry is crucially important. But now, it was all gone!

Later, the pawn shop slips proved that over 30 pieces had marched out of her house . . . while Penny was still en route to the airport. That proved that the plan was made in advance. It was not some random break-in. It all pointed to Vicki as the perpetrator.

Penny’s other son is a deputy sheriff. He urged her to call the police, friend or no friend.

Penny said, “I felt those horrible feelings typical of being victimized: used, abused, violated and betrayed. I even allowed my Nice Christian Woman self to be angry, truly angry — not just dismayed, saddened, or disappointed.”

But on Penny’s birthday, Vicki called her. She confessed to the heist. Vicki begged her not to send her to prison. Out came an irrational plea, that they could still be friends if she paid her back, and besides, she did not really need any help, as she did not really have a problem.

Help? Problem? SHE was the one who gave PENNY a problem – a big problem! Some birthday greeting!

Even so, Penny was reluctant to turn her in. She says she would rather have had four root canals without anesthesia than have to make the next three calls: one to the police, one to the insurance company, and one to the pastor who shepherded herself and Vicki.

The police picked up Vicki in the patrol wagon. She was reportedly handcuffed and yelling profanities. Turns out she had broken parole, a status of which Penny was unaware.

Parole for what, how, when, where?  The all-too-frequent answer these days: DRUGS.

Vicki had served time in prison. There would be no chance for her to avoid going back . . . unless Penny dropped the charges.

DROP THE CHARGES!?! Have you lost your mind? Just let her get by with this? Pretend it didn’t happen? Not hold her accountable?

But that is what Vicki’s lawyer, brothers, and frail, elderly mother repeatedly begged her to do. Worst of all, their pastor did, as well. Talk about being re-victimized!

“PLEASE DON’T SEND HER TO PRISON!” The endless tape played between Penny’s ears. Those horrible feelings recurred with every visit to one of the 58 pawn shops in the metropolitan area, trying to locate as much of the jewelry as possible.

Some of it was upscale. Almost all of it had great sentimental value: her graduation (1965) pearls, intended for her June-born granddaughter . . . the diamond heart earrings planned for a 16th birthday gift for another granddaughter . . . her deceased grandmother’s ruby ring . . . her deceased mother’s wide gold wedding band, set with a small diamond, the best her late father could afford after returning from Germany and WWII . . . her engagement ring . . . her diamond anniversary band . . .

. . . and how could Vicki, a Nice Christian Lady, have possibly gone through with stealing her gold and diamond cross pendant on the rope chain? Surely that must have given her a moment’s pause. But if it did, it was a very short one.

Her crime fit the category of grand larceny. A felony. Penny felt deep humiliation in going to court numerous times over eight months . . . facing the profound sadness in their shared Sunday School class . . . trying to keep news of this from fellow church members . . . having to have the locks changed on her home.

She became fearful of even having anyone come into her home, which was the saddest of all, since she had always been so wonderfully generous and hospitable.

In her mind was a tug-of-war:

Wouldn’t dropping the charges be enabling? Oh, no! I cannot go THERE again. I had helped tear my marriage asunder by enabling my husband’s destructive behaviors. Been there, done that. Got the T-shirt, the hat, the tape and the mug. I WOULD NOT BE AN ENABLER AGAIN!

Their pastor, having dealt with other families affected by drug use, knew the judge would listen to him if he could present a rehabilitation treatment plan that might help Vicki and delay her going to prison for one year. But he, Vicki’s family, her lawyer, and the District Attorney needed Penny to be in agreement, or the judge would not approve it.

That felt to her like another kick in the gut. All she could focus on was the injustice that had been done to her. There were many sleepless nights. She was dancing on the edge of The Black Hole of depression, trying her best not to fall in, wondering: where was God in all of this?

At 3 a.m. one summer night, God spoke to her as clearly as if He were in her room.

“Your answer, Penny, is to trust in ME with all your heart. Lean not on your own understanding, but acknowledge ME, and I will direct your path.”

A beautiful, wonderful peace came over her. She jumped out of bed and quickly wrote down the treatment plan that God provided to her in a flash of inspiration:

Inpatient care to detox and to come face to face with the drug and alcohol problems; then return home for twice-weekly sessions with a psychologist in their church; be held accountable in daily prayer and counsel with a senior adult woman in their church; weekly attendance at any Bible-believing, truth-teaching church, and make restitution to all pawn shops where Penny was able to recover jewelry.

She called their pastor and the lawyers to tell them the plan she would agree to. They all had their doubts as to Vicki’s ability or willingness to succeed. But Penny’s heart said to give her this chance. The results would be solely up to her. God would hold Penny responsible for the input, but hold Vicki responsible for the outcome.

Much to everyone’s surprise, Vicki took advantage of the opportunity and complied with the plan. She came home from treatment clean, sober, and willing to work through her issues. Their Sunday School class was willing to accept her back. Everyone knew that the best, safest and most uplifting place for her was back in her home church among her friends and sisters in Christ. Forgiven! Still loved! Take THAT, Satan!

She has stopped pretending to be a follower of Christ, is now walking the talk, and submitted herself for baptism. Her mother went to be with the Lord with Vicki at her side instead of in prison. Her brothers were so grateful for the care she gave their mother in her last years. And all those good things wouldn’t have happened . . . if Penny hadn’t been able to forgive.

She enabled, all right. She enabled love and forgiveness to reign.

The revival in Penny’s own spirit came with a small sacrifice of self. Her plans and getting her way were absolutely nothing, compared to the sacrifice of Jesus on the Cross FOR HER.

She puts it this way:

“God has shown this slow learner (‘One more time ‘round that mountain, Penny’) over and over again that relying on HIM to bring justice is the right and only way. And that I truly am healed, which is the whole point. Vicki let God have His way with her life and I let Him have His way with mine. We can once again say we are friends and sisters in Christ, often walking arm in arm into church together and going to the altar to pray with and for one another. This experience has given me an awesome awareness that God’s forgiveness not only extended to Vicki, it extended to and through me.”

The light of God’s love shines through Penny and Vicki as brightly as if a thousand-watt lightbulb were shining on that jewelry. Happily, Penny has recovered most of it, including that very special cross necklace.

It shines now for her with an extra-special glow. This story reminds us that the jewels of forgiveness are not just beautiful here on Earth . . . they shine through all eternity. †