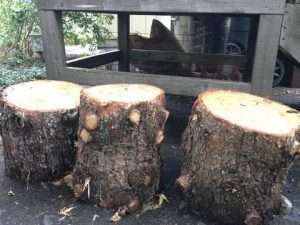 For then shalt thou have thy delight in the Almighty,
and shalt lift up thy face unto God.

Usually, when someone asks how your daughter’s outdoor wedding went and you laugh, it’s not a good sign. But in our case – hallelujah! We got such a load of blessings straight from heaven above, making everything go so well for Eden and Zack, that all you CAN do is hold your sides and roar with merriment.

It didn’t seem like fun at the time. It was so unbelievably hot all that week that I had to go down to the neighborhood pond, scene of the nuptials, once or twice a day to water the flowers. If I didn’t, there would be dry, brown sticks in the ground making a decidedly non-joyous statement for the wedding décor.

During one of these missions of watering mercy at 100 degrees, though, my phone literally got fried in the sun. It was totally dead. With 4,000 vendors demanding phone confirmations, instructions, and so forth, it was a panic situation. Fortunately, the folks in the phone E.R. delivered successful C.P.R. and I learned always to put my phone in the deep shade when outside in the summertime. Whew!

Indeed, it was so hot that some last-minute gardening chores at the wedding scene proved extra-stressful. For example, there was a neglected-looking small tree and a large rut caused by truck tires that bothered my perfectionistic eyeballs. So I slipped out and bought five big plastic bags of mulch to beautify those areas.

It was so humid that every pore of my skin was emitting sweat. I lugged those bags, one by one, ripped them open and distributed the mulch. With a self-satisfied smile, I brushed the excess mulch off my arms and legs . . . discovering that my sweat had fused with the dark blue ink on the plastic mulch bags and STAINED MY SKIN LIKE A GANGBANGER’S TATTOOS!!!!

My forearms and shins looked like an NFL player’s!

Finally, rubbing my skin raw with a nail brush and pumice did the trick. But that just raised another problem: when I walked down the aisle and people saw the bright red forearms and shins, would they . . . wonder?

But I didn’t have time to contemplate that. Too many more tasks to be done!

The whole idea of this outdoor wedding in the park was to make it seem casual, effortless and spontaneous, as if we’d just thought of everything that morning. HAH!!!! It was tons more work than the two previous weddings, as elegant and thoroughly traditional as they were. I was tight-roping along the road to the Funny Farm in those last few hours.

The clock was ticking. The tension and stress mounted. But just as I started sinking into the mire of an impossibly long things-to-do list, just as He always does, the Holy Spirit rode in like the heavenly cavalry.

He literally rode in this time, in the person of an uninvited guest to our Friday night “Primp the Pond Party.” Families and friends of bride and groom had gathered for last-minute raking, tree-trimming, leaf blowing and other tasks to make the pond area pristine. I was still in Sea Witch Stress-Out Mode, and worried about so many details, when suddenly, here came an uninvited guest from our equestrian neighborhood just west of the park.

It was a middle-aged man, riding a fancy horse. He was doing fancy riding tricks, making the horse prance. Most notably of all, he was bronzed, muscular and SHIRTLESS.

He was apparently the friend of one of our neighbors, taking advantage of the late August sunset for an impromptu ride. He galloped ostentatiously past our party and we all stared, slack-jawed.

Who was this, Vladimir Putin?!?

Someone wondered aloud if the groom and the two dads were going to ride into the wedding ceremony, shirtless, on mighty steeds, like that.

It was like the dam of stress burst. The tension vanished. I threw back my head and laughed. It was just goofy.

A moment later, my wedding décor guru, Jeannie, remembered that we had wanted our husbands to bring up some heavy stumps that were behind our neighborhood storage Quonset hut. We have a secret brush pile there for only neighbors to use.

These 200- and 300-pound stumps were to serve as the adorable end tables for the many glass hurricanes we were setting out next to the seven adorable white wooden benches that my adorable cousin had made for the event. We wanted 15 or 20 of those big honkin’ stumps.

For weeks, Jeannie and I had eagerly pictured how cute the stumps would look in our rustic reception scene.  But we had kind of forgotten to mention our “vision” to those of the male persuasion in the wedding prep party: her husband and mine.

You should have seen their faces. The prospect of lugging those enormous stumps! The time! The effort! The hernias! Oy! Wouldn’t cardboard boxes on end work just as well?

We wedding décor enthusiasts frowned. They sighed. They were resigned to their fate . . .

. . . when all of a sudden, down the access road into our park came an old red pickup. It carried two unshaven, cigar-chomping gents in front AND A WHOLE PICKUP LOAD OF MOST LOVELY STUMPS IN BACK!!!

First, we gaped. Then, we screamed. We whistled. They didn’t hear us. But one of our number hopped on his bike and pedaled madly after them.

We knew he would convince them to come and dump the stumps at our reception area instead of back behind the Quonset. They were smaller, lighter-weight pine stumps, with jolly bumps on the sides, ideal for our purpose. And there were about 20 of them.

It was as if the heavens opened and a choir sang, “Ta daaaaa!!!!! You need stumps? You GET stumps!!!” Our problem was solved!

Between the accidental tattoos, Vladimir’s wild ride, and Popeye and Bluto showing up just in time with stumps, all the stress and strain just melted away.

What on earth was I worried about, anyway, making this wedding come off? I am the daughter of the Most High God! He loves me completely! His favorite thing is to give! He has all the power in the universe! If stumps would make me happy, then by cracky, stumps I would have.

Can’t even describe the joy that flooded my heart at that moment. There’s nothing a parent wants to do more than to bless her child, which is why I had tried so hard to make Eden’s wedding just the way she dreamed it. Now, with the stumps miracle, I knew that God was doing the exact same thing. For me.

I just remember Jeannie standing with her feet shoulder-width apart, her arms and face skyward, in extravagant praise. I knew she was thanking God for this hilarious and much-needed miracle. My mood shifted once again, from humor and hilarity, to joyful, tearful, profound, unending gratitude.

It was all totally wonderful from that point on – like a dream.

The brutal temperatures broke, and the wedding day dawned bright and cool. We had worried about blast furnace temperatures. But it was lovely and moderate. Nobody even broke a bead of sweat!

The granular, organic mosquito repellant worked like a charm. Not a single bug bite was reported.

The flowers were colorful and perky. . . the mother of the bride sported no outlandish tattoos . . . the clear tent was a knockout under the stars . . . the food and drink flowed . . . and love and cheer was shared by all.

There was another moment just as powerful as the stumps epiphany. It was another picture of God’s love and provision for the ever-growing scrapbook in my heart of moments that show Him at work.

Upon her engagement, Eden told us that she wanted to get married outside, under a canopy. She had had a vision. But it was kind of hard to describe.

“Do you mean, under an arch?” I asked. I imagined growing climbing roses all summer on an arch for that purpose.

Change gears. “Do you mean a chuppah, a four-posted Jewish canopy? We could build one with birch logs. . . .”

I gave up. She knew what she wanted. Eventually, she hired a company to come and wrap a long bolt of beautiful white fabric high up on the two strong limbs of the giant old cottonwood by the pond that was to be their ceremony focal point. All week, the wind would blow the ends from side to side, ever so slightly, creating a beautiful effect. It wasn’t exactly a canopy, but it was white fabric moving slightly in the wind. Neat!

Well, on the wedding day, the wind shifted, and came up stronger during the ceremony. It was blowing from the north, toward the congregation. So instead of hanging down, the white fabric was billowing toward us.

During the vows, the breeze lifted the end of the fabric over the heads of the minister, the bride and the groom. The wind made the fabric majestically ripple over them. It created a picture of the Holy Spirit, actively blessing and uniting the radiantly happy couple.

The purpose of a canopy at a wedding is to symbolize the presence of God, covering the covenant of marriage. That’s what the minister’s wedding message had been: the covenant power of holy matrimony.

And here was a living, moving canopy over our daughter and her beloved. It was a canopy that was uncontained, unexpected, unplanned, and yet unforgettable in its pure and simple loveliness.

It was the canopy that Eden had pictured. And it had effortlessly materialized. Just like the stumps!

He just does. It’s His favorite thing. Piece of (wedding) cake for his favorite people: young lovers, who pledge to live together by His rules, under His watch.

Joy without measure, pressed down, shaken together, and running over (Luke 6:38), for the rest of their lives.

To have and to hold, in sickness and in health, forsaking all others, as long as they both shall live . . . stumped, through it all, by God’s matchless beauty, joyful provision and unending love. †