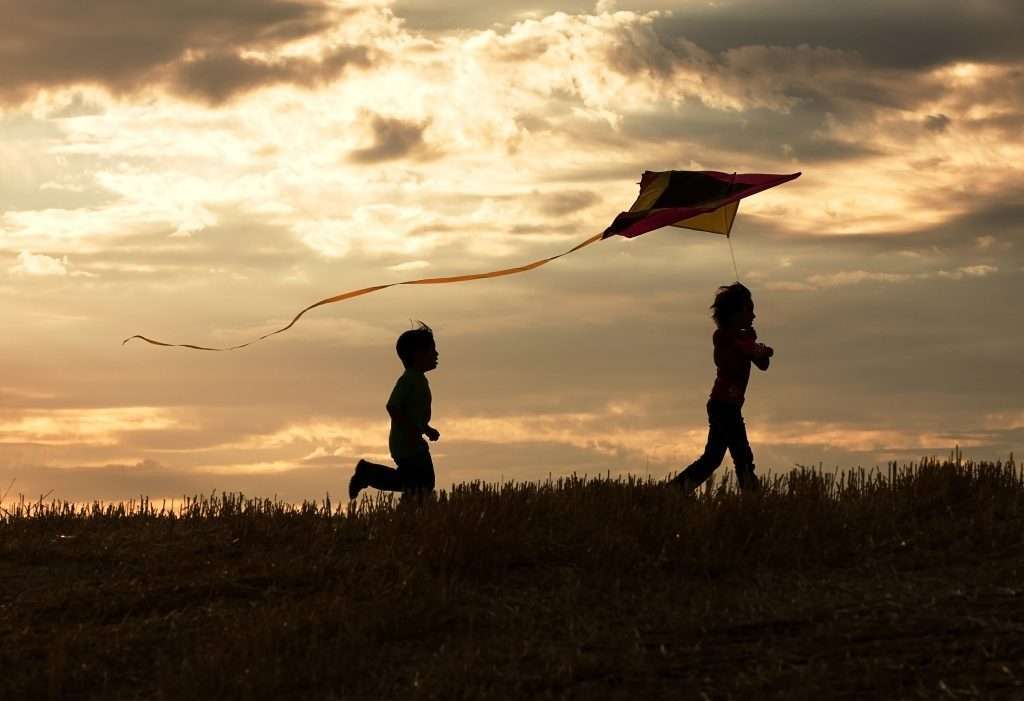 We were going to babysit our “grands” for the weekend. El Magnifico found several old kites and was excited to introduce them to that great childhood experience. The kites hadn’t seen the light of day for probably 25 years.

I was amused as they took over the living room, then his office, as he fussed with them in preparation. He made a special trip to the sporting goods store. He tweaked the set-ups for hours on end, and chose the most flight-worthy one. I was wondering what was up with all this effort.

Finally, the big day came. Thankfully, it was really windy. We went to a playground with a big hill, perfect for kite-flying. As the kids played on the playground, El Magnifico and our college-age daughter got the selected kite up into the air.

The little kids weren’t interested, having never flown a kite before. Big whoop! Finally, we herded them over and they both held the big ring with the string for about 20 seconds each. They smiled. That was our big whoop! We got a cute photo, then released them back to the playground.

I noticed, several minutes later, that El Mag was still sitting there, still flying the kite, looking up at it with kind of a funny expression on his face. Reliving your childhood? Amazed that you could still get that thing to fly?

I walked up, and asked. He gave a crooked smile:

“I was just sitting here remembering how Steve and I used to go out and fly kites together. We would have big fights. We would put razor blades on our kites and try to cut each other’s strings. . . .”

His voice trailed off. He continued to smile, though, looked back up, and waggled the kite a little bit.

I bowed my head in solemn remembrance and thanks. The “Steve” he mentioned was his best friend from childhood, who recently died. He must’ve been making such a big deal out of kite-flying because he was remembering all the fun they’d had together doing that.

I owe Steve a lot for the man El Mag has become. As a wife, I benefitted from someone who loved my husband in a different way than I did, who built him up, and supported him through thick and thin. They had a ton of fun together, but they also practiced life skills such as loyalty, trust, encouragement and mutual respect. That’s what a true friend does best.

Steve is responsible for most of the happy childhood memories El Mag has. I have never learned about most of them, and probably never will. They had some wild adventures that are the stuff of legend among their friends. No doubt if it weren’t for Steve, my husband would never have had anywhere near as much fun as a kid.

Steve was a trustworthy friend and foe – someone “safe” with whom El Mag could try new moves, spar, compete, pretend-fight, test himself . . . and grow up.

He was the perfect childhood friend. And now he is gone. All my husband has left is his memories.

El Mag is a manly man, who loved his friend in a manly way. He has a very stiff upper lip. I haven’t seen him cry. But he’s still grieving. The pain is still raw.

The thing is, when he smiled, looking up at that kite, I knew he had crossed the line from the sorrowful grief that holds you down, to the joyful remembrance that lifts you back up.

Who knew kite-flying could be powerful therapy? The Lord is such a great psychiatrist!

No doubt Steve, a strong believer, is in heaven. So I’ll bet he was looking down on that kite that day, seeing his old friend, and smiling, too.

One friend is still tethered to the Earth . . . the other one waits for him. They’ll be together again one day, eternal playmates and forever friends. †

The Lord is nigh unto them that are of a broken heart;

and saveth such as be of a contrite spirit.

Like Loading...
Posted in Death & Beyond, It’s a Guy Thing
← All-American Black HeroThe Era of the Backwards Underwear →