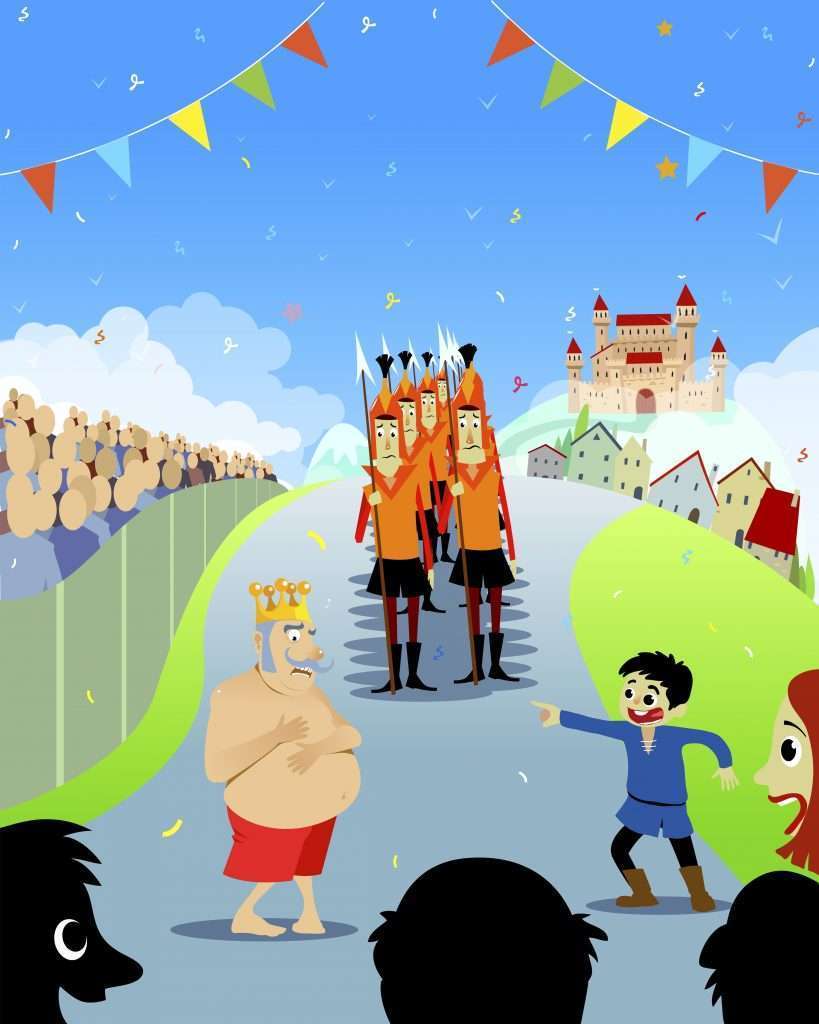 When I was a kid, my favorite fairy tale was “The Emperor’s New Clothes” by Hans Christian Andersen. Because it is a classic piece of 19th Century literature? Because it has profound depth of meaning, though written for children? Because the author was Danish, like me? (Well, 4.7%, but proud of it!)

Noooo. I didn’t love the story because of all that. I loved it because the PICTURES showed the emperor’s naked BAHOONIE. To me, as to most kids, that’s the ultimate in hilarity.

But as my good friend LeAnn Morin suggested, that story is a perfect description of what’s gone wrong in our country, politically. Evil, in Biblical proportions. Good news: things are bad, but God is in charge, and if we insist on truth, the whole truth, and nothing but the truth, as in the famous story, we’ll turn things around.

You know the tale: pompous king is all about clothes. Swindlers come to town, claiming to be able to make him a feather-light outfit of the finest silks that would be wondrously beautiful.

On top of that, they claimed, the outfit would be SO great that only the finest, smartest, best people would be able to see it. Certainly not those stupid peasants.

Vanity, thy name is “Easily Manipulated.” He bought it.

The Emperor came in to check the “progress” on the looms as the swindlers pretended to feverishly cut, sew and drape the invisible fabric. He couldn’t see a gosh-darn thing, but rather than (excuse the expression) expose himself as foolish, he raved about what a great set of threads they were making.

He sent his courtiers and ministers in, too. But they were under the implied threat that if they couldn’t see the clothes, they must be too incompetent for their jobs. They could be made to do a swan dive off the castle tower to the cobblestone streets below. Splat! Eww! So they, too, lied.

The swindlers “finished,” got the king “dressed,” and blew town with big bucks. Came time for the big show-off parade through town. The emperor sashayed. The confused and cowed townsfolk were all afraid to say anything, so they pretended his outfit was the bomb.

Suddenly, a little child pointed at the Emperor, and shouted a truth bomb:

One second . . . two seconds . . . and the crowd went wild with laughter. The kid was right! They all realized that only the kid had the guts to tell the truth. Even more ridiculous, the king was too proud to admit he’d been conned, and continued with his ostentatious parade, bare bahoonie and all.

See? That’s us! At least, that’s the big shots in D.C. of both political parties who compose the “gang” we know as the Deep State. The evil, twisting, satanic deceptions have gotten ‘way out of control.

For years now, I’ve wondered how people could be so blind to the truth. Maliciously blind! Worse than people who still buy a vowel on “Wheel of Fortune” when the answer is obvious!

But this is bad. From the impeachment scam based on invisible evidence that never existed . . .

. . . to the covid scam, funded and fomented by President Trump’s foes and extended by yo-yo swings in government health directives . . . all perpetrated by vainglorious pseudointellectual officials, pointless business shutdowns and funny numbers stoking irrational fears in cases vs. deaths reporting . . .

. . . from “peaceful protests” that have turned parts of our cities into Third World hellholes . . .

. . . to the long line of distressing cover-ups about Clinton Foundation pay-to-play schemes . . .  the uranium sale threatening our national security . . . the “what difference does it make?” horror of Benghazi . . . pallets of cash to hateful Iran . . . Biden, Burisma and blackmail . . . business bribes from Red China . . . the state of Joe Biden’s cognitive abilities, and Kamala Harris’ dirty track record . . . Seth Rich’s murder and the hushed Hunter Biden  laptop . . .

. . . to the despicable censorship, bias and propaganda flowing from our once-proud mass media aided by Big Tech and Hollywood, using our dollars against us . . .

. . . from the attacks on honest, middle-class conservatives by Deep Staters Hillary Clinton, who called us “a basket of deplorables,” and former President Obama, who said we were “bitterly clinging to the Bible and guns” – intimidating insults just like the Emperor trying to label the peasantry as stupid . . .

. . . to the hypocrisy of Nancy “Let Them Eat Cake” Pelosi and her $24,000 refrigerator stuffed with $14-a-pint ice cream while millions of Americans are struggling financially because of covid . . . and billions in covid relief money going overseas and elsewhere for nonsense projects instead of helping Americans . . . and a growing list of public officials showing they believe that masks, joblessness and shutdowns are “OK for thee but not for me” . . .

. . . and don’t even get me started on the terrible election fraud, so obvious to honest people but somehow invisible to the Big Shots. . . .

Have we lost our country? Have we detached from reality? Are we going down because of the massive fraud and corruption here in the Information Age, which supposedly gives us the tools to establish facts and truth? Are reason and logic, and what you can see with your own eyes, useless any more?

Ah, but that kid!

The kid who shouted the truth about the Emperor’s absent clothes!

The kid with the courage to rise above the sludge and fear, and tell it like it is!

When even one person in a crowd values truth over self-interest, and can tell reality from “spin,” there’s hope. We’ve seen it throughout history, and we’re seeing it now.

I see a lot of truth-tellers rising up right now. Their platform: the Constitution. Their goal: stop the cheating and corruption. All this stuff the Deep State has been doing? That ain’t us. Let’s cut all that out.

I think the big power pinata that is the corrupt Deep State is going to be hit hard with the truth. All its cheating and bribery and cover-ups are going to come spilling out like candy onto the sidewalk.

And their bare bahoonies will be showing. Won’t it be great?

Let’s pray. Let’s confess how our own vanity and apathy let the Lord down as this Christian nation slipped into decidedly un-Christian behavior by many of our leaders. Let’s put a stop to that, pronto. Let’s use our own good laws to extricate corrupt people from important government jobs. Let’s  never be intimidated into silence or soul-crushing hopelessness again.

The naked truth will win this for us. Truth shall reign, if we pray. It’s because the One Who IS truth carries a terrible, swift sword . . . restoring truth, justice and the American way.

In that day the LORD will take his

He will kill the dragon of the sea.