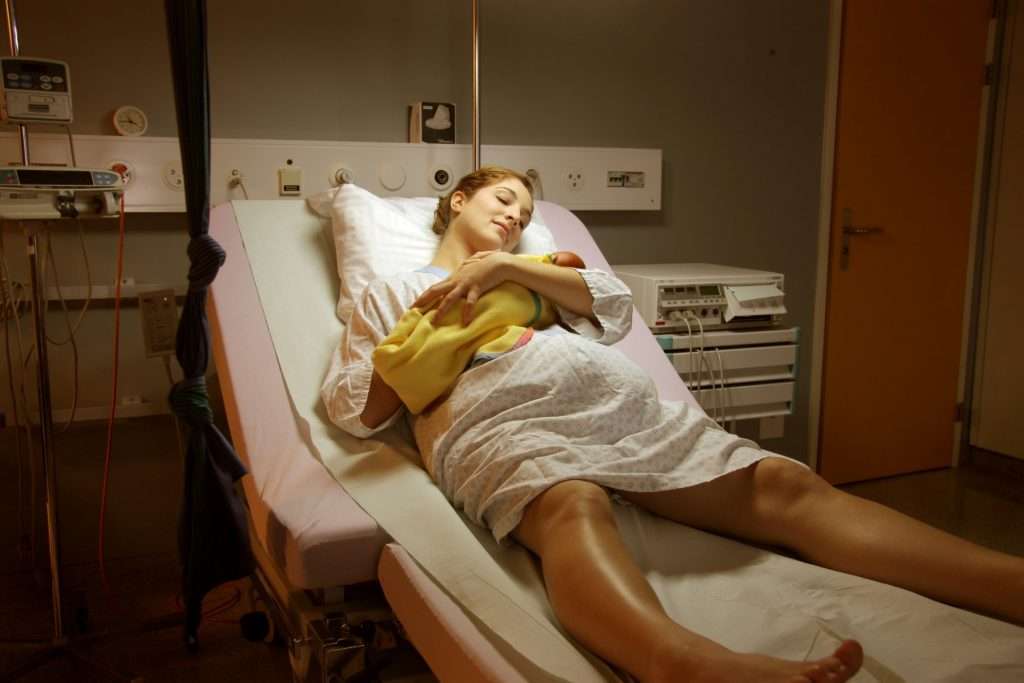 (Another in a series of maternity humor stories in honor of daughter Eden, whose first baby is due on . . . brace yourself . . . June 7, same day my first was due. But maternity antics intervened. . . .)

If you want to perpetuate the human race, never let mothers tell their Terrible, Horrible, No Good, Very Bad labor stories to downy-cheeked teenage and young adult females. Or we’re toast. No one will ever want to have babies again.

It’s just too scary.  We definitely need censors in the childbirth classes. Somebody needs to muzzle those truth-tellers who laugh hysterically when the instructor insists those aren’t labor “pains,” but “contractions.” They lie, I tell you! They lie!

In our class was a darling rural Iowa couple. They were dairy farmers. Jesse, the father-to-be, shared with the group that he had already participated in over 100 births. But they were all calves. For this first human birth, he drawled, “I hope I don’t have to take a hold of this one and YANK.”

The way he said “YANK” put a chill in my bones which resides there yet today. I pictured a massive set of cold steel forceps yanking my baby out by the head and reshaping it into a Hershey’s kiss. Try getting a football helmet or a bridal veil on.

Turns out Jesse’s wife went into premature labor in the middle of the night. But he wouldn’t leave ‘til he had milked all the dairy cows. First things first! They broke all speed records trying to get to the midtown Omaha hospital where our classes had been held. They had to divert to an inner-city hospital when the baby crowned on the Interstate while they were still in western Iowa.

The baby was born in the hospital parking lot. At least it wasn’t in a dairy barn stall. Mother and baby were doing fine, Jesse reported to our instructor for the next week’s class . . . and no, he didn’t have to YANK . . . but the vicarious stress was mooooo-ving to the rest of us. (Note to self: line up pet sitters in advance to feed Buford and Budge, come what may.)

Another class member then shared that this was her second pregnancy, which was also miraculous, since the first labor was very difficult and went on for a lot of hours. But she wanted a second child and was hoping this labor wouldn’t be as hard. She had had to push for over an hour, she said, and in the effort burst every blood vessel in her eyes and face. They were bright red, and her hair was matted and sticking straight up.

Her helpful, helpful husband said she looked like that scary MEDUSA from Greek mythology. You know, with the writhing snake hair and all.

(Note to self: pack hair care stuff in the overnight bag to make a nice, neat bun during labor, and put in some concealer and eyedrops as well. Second note: also pack a stun gun should my Beloved dare to say something like that.)

One by one, the other couples in our childbirth class had their babies. Each had a different story and each story had its scary elements that made me wince. Beads of sweat!

I quit my job as of the last of May, knowing that my insurance would cover my maternity costs through the following month. With a due date of June 7, I was set.

But the due date came and went. My preggie belly got larger and larger and LARGER. My ankles swelled up to redwood size. My getaway bag, complete with a whole array of hair-care products, had been sitting at the ready so long I literally had to dust it.

This was in the day when they didn’t get too worried if you went past your due date. Mine might have been the case that changed their thinking on that.

Through the hot and humid days of June, as my preggie belly got bigger and bigger and BIGGER, I did all the rituals prescribed by the ancient scholars to bring on labor: cleaned the stove’s drip pans, alphabetized the spice drawer, cleaned the fireplace andirons. My doctor winked, “You know, a due date is only an approximation.” I hate doctors with a sense of humor. Don’t you?

Finally, three weeks and a day past the projected partum date, it happened in the early morning hours. Labor had begun! By the time we got settled in the labor room at the hospital, my cervix was already dilated to four centimeters. At 10 centimeters, the baby would come. Yay! Forty percent done! We’re going to make that insurance deadline, with a day to spare!

They had this big blackboard out in the hall with the last names of each laboring mother-to-be and data such as time of arrival and centimeters dilated. There were quite a few. I was the furthest dilated. My husband, ever the golfer, crowed, “Hey! You’re the leader in the clubhouse!”

Even though the – ha! ha! – “contractions” did hurt, the pain was purposeful and positive. But then, though the pains continued, the progress stopped. I quit dilating. The other mothers eclipsed me.

The other labor rooms emptied out. Day fell into night. I remained the leader in the clubhouse only because all the other “players” were already celebrating in the 19th hole.

When was I going to get MY turn at UNHHH! SLAP! WAHHH?!?!

Seventeen hours after arrival, I heard Dad, who had been in the waiting room for hours, call down the hall: “Hurry up, Sus, Dairy Queen closes at 10:30!!!”

Suddenly, my cervix responded with a mighty move of self-righteous indignation. It creaked open from 4 centimeters to 10 in mere seconds. Three pushes. Double-triple UNHHH! SLAP! WAHHH!!! And out popped our firstborn, Jordan Jennifer.

She weighed 10 pounds, 2 1/2 ounces. Go pick up a sack of potatoes at the grocery store and see for yourself how much that is.

My husband later helpfully explained that “she threw a big block being born,” and unfortunately her clavicle had snapped. It was not uncommon with big babies. We just had to pin her little cuff to her opposite shoulder for a week or two and it would heal all by itself. SHE WAS NOT EVEN A SECOND OLD AND I’D ALREADY HURT HER!!! AAAIIIEEE!!!

My doctor, the funny one, supplied one of the only things I remember about the whole ordeal as he tended to the minor post-partum tear that had occurred because of that big birth. Did he compliment me on my stamina and fortitude? Say I did a great job delivering a beautiful baby? Nooooo. “Great news!” he remarked. “Your sphincter’s intact!” Heyyy! There’s one to needlepoint for the nursery and brag to Bridge Club!!!

My older brother, contemplating the feat of my fast-acting cervix accommodating that super-sized baby, helpfully supplied the caption I can never get out of my head: “The sounds of canvas ripping!!!”

My Beloved, eyes like saucers, added, “Wow! What a whopper!”

I looked terrible, like I had just been through a 17-hour ordeal.

I had pictured myself with a ribbon in my hair, smiling for the camera with lipstick on, cradling a precious little baby. Instead, I was Medusa with an intact sphincter but ripped canvas because of my new whopper, who had gotten her first broken bone at age one second.

The good news is, I never really got scared the whole time, because I knew my Savior was with me every step of the way. So it was all good. Shocking, but good.

Best of all, this new baby was perfect. And no one had to YANK! †

There is no fear in love;  but perfect love casteth out fear. . . .